The Taylor Wimpey share price has gained 1.2% today despite the announcement the housebuilder’s chief executive Pete Redfern is to step down from his role after 14 years. Mr Redfern took over the role in 2007 having previously been CEO of George Wimpey after brokering the merger with Taylor Woodrow that would turn the company into the UK’s third-largest homebuilder. Legend has it the deal was thrashed out in a motorway café on the M40.

Redfern is credited with being the driving force behind the combined company’s growth over the 14 years since and the Taylor Wimpey share price initially dipped 0.3% on the news before recovering to a 1.3% gain. Despite yesterday’s news the feared activist investor Elliott Management has reportedly begun to build a stake in Taylor Wimpey Mr Redfern today emphasised that did not influence a decision he said he had been considering for some time. 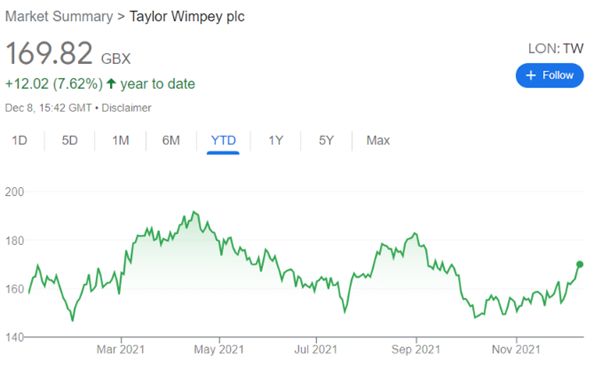 The company told investors the recruitment process that will settle upon his successor is at an “advanced” stage and that Mr Redfern will stay on as chief executive until the new person moves into the role.

Mr Redfern, who is one of the FTSE 100’s longest-serving chief executives, commented:

“It has been a privilege to work at Taylor Wimpey for the last two decades and to lead a business of which I am so proud, working with so many exceptional people both within the business.”

“The business is in excellent health and is well positioned for strong future growth. Accordingly, I am confident that now is the right time for fresh leadership as Taylor Wimpey starts the next chapter.”

Taylor Wimpey has bounced back well from the pandemic this year and Mr Redfern admitted that steering the company through the financial crisis of 2007/08 was a more difficult time and his most challenging professional experience. The homebuilder was threatened with collapse at one point in 2009 before the chief executive succeeded in closing a rescue rights issue and refinancing debts.

It has since gone from strength to strength and is currently valued at £6.1 billion and expects to generate an operating profit of around £820 million this year thanks to completing 14,000 new residential properties.

While Mr Redfern plans to take some time out to spend with his family, he has five children, and hobbies that include woodwork and mountain biking, the 51-year-old said he does not plan to retire. He said he anticipates eventually returning to work and would not rule out another chief executive position with a public company or returning to the housebuilding sector.

Taylor Wimpy’s chair Irene Dormer praised his role in developing the company to its current position of strength, commenting:

“Pete has made an invaluable contribution to the business during his almost 15 years as CEO.”

“Pete has led a management team which has overseen the transformation of Taylor Wimpey into one of the largest housebuilders in the UK, with an industry leading landbank, a strong financial position and a clear and deliverable strategy for profitable growth.”