The Taylor Wimpey share price has risen by 3.3% today, reversing some of the losses taken over a bad start to the year that has seen the housebuilder’s valuation decline by over 10%, after the company today promised investors it would return more cash to them over coming months. The windfall comes as a result of what Taylor Wimpey described as an “excellent” 2021.

Demand for larger properties, especially houses with gardens, has leapt as a result of the pandemic. As well families spending more time at home desiring more space, buyers were further encouraged to take the leap by the stamp duty holiday that ran from 2020 until late last year, offering savings of up to £15,000. Rock bottom interest rates and fierce competition between providers also led to cheaper mortgages which helped maximise selling prices. 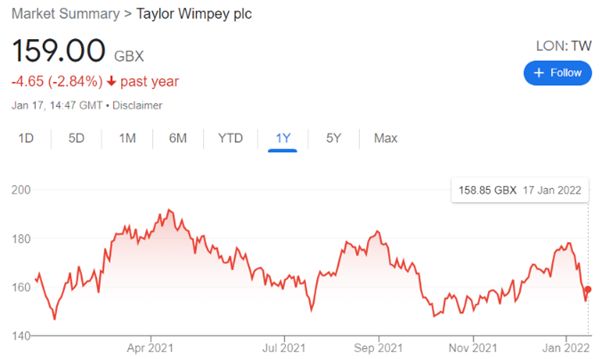 The combination of favourable headwinds means the homebuilder expects to now realise an operating profit of £820 million for 2021 from the sale of a little under 14,000 homes. That represents a growth of 47% in the number of new-built properties delivered compared to 2020, when construction work and administrative processes were delayed by Covid-19 disruption.

As a result, Taylor Wimpey finished last year with a bank balance of £837 million. It will now, it says, see how much cash is left once it has paid out its dividend and planned for expenses over the rest of the year. Any “excess cash” surplus will be returned to shareholders, most likely through a major share buyback. The company will confirm details alongside its full-year results, due to be reported in March.

Taylor Wimpey is worth around £6 billion and is a member of the FTSE 100. It has existed in its present format since 2007 when created out of a merger between the housebuilders George Wimpey and Taylor Woodrow. The deal was legendarily struck by current chief executive Pete Redfern at a service station on the M40.

Despite sector concerns over how much it will cost to replace dangerous cladding used on buildings over the past 20 years and now banned as a result of the Grenfell Tower scandal, Taylor Wimpey has repeatedly stated it is confident the £165 million it has set aside to cover related expenses will suffice. It has been challenged on the sum but still considers it a “reasonable estimate”.

If the cladding provision does prove sufficient, that should leave plenty of cash for redistribution to investors through a major share buyback over 2022.