Taylor Wimpey, the FTSE 100 company that is one of the UK’s biggest housebuilders, defied a supposedly sluggish 2019 property market to sell a record number of new homes over the year. Not only were sales numbers up but the company also reported it had achieved higher average sales prices compared to the year before. The Taylor Wimpey share price yesterday gained 3.9% to 209.75p. Into the afternoon trading session today, another 0.75% had been added to those gains. 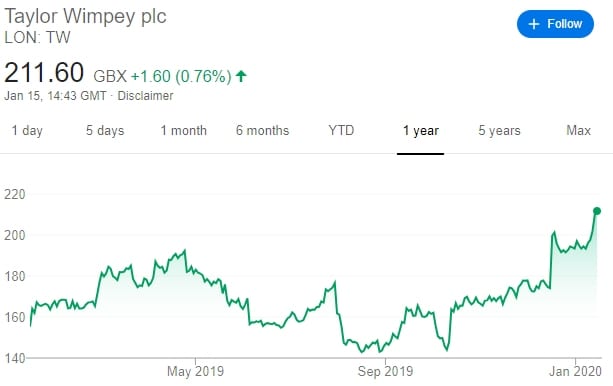 The company sold a total of 15,719 new homes last year, representing 5% growth on 2018 total. The average selling price of Taylor Wimpey homes was £269,000, compared to £264,000 the year before. One negative in the company’s full year results was a significant drop in the average margin per property sold. That fell to 19.6% from 21.6%. The drop was attributed to higher construction costs, partly due to improved quality, and flat selling prices over the first six months of 2019.

Taylor Wimpey notified investors that it plans a cost cutting drive that will focus on a reduction in the company’s expenses budget and operational efficiencies. The information was published ahead of full-year results, which are due to be released on February 26th.

Chief executive Pete Redfern commented that despite the overall positivity of the company’s 2019 results, he still believes that consumer sentiment has been affected by Brexit uncertainty. However, he still described the mood among buyers as “surprisingly robust” over both 2018 and 2019.

Mr Redfern also stated that December’s general election result, particularly the greater clarity it had given to the Brexit timetable, was a positive for the housing market but that it was still early to make predictions on just how much of a bounce would take hold in the shorter term, stating: