An international equities sell-off led by tech companies yesterday hit stock markets globally. On Wall Street the tech-heavy Nasdaq index suffered its worst day in 6 weeks, dropping 261.61 points, or 1.9%. Investors will keenly await the market opening today to see if yesterday’s slide represented a case of the jitters or might develop into a deeper correction after months of, given the pandemic backdrop, phenomenal gains.

At least for now, it looks likely some of yesterday’s falls may be reversed today. Markets have been positive in Europe with the FTSE 100 up 1.2% today and the broad-based Euro Stoxx 600 up 1.5%. Many of the big tech companies that suffered falls in their value yesterday are also slightly up in after-hours trading just ahead of the opening of the Wall Street session. 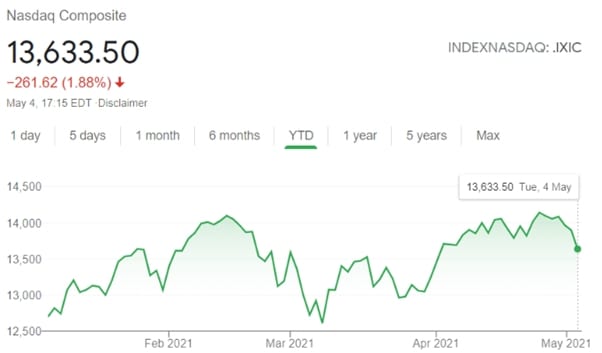 Investors appear slightly confused as to whether to continue to back the bull market that has been in place over the first several months of 2021, or profit-take on concerns valuations have become overstretched, especially in the tech sector.

All of the largest U.S. tech companies suffered losses yesterday with Apple down a whole 3.5%, followed by a 2.2% decline for Amazon and a 1.7% hit for Google-owner Alphabet. All three recently benefited from new gains sparked by strong results over the first three months of the calendar year.

While the tech-heavy Nasdaq’s 1.9% drop was the heaviest of the major U.S. indices, the broader S&P 500 was also down 0.7%. Yesterday’s pain on Wall Street followed on from a bad day for the major European indices, with the FTSE 100 down 0.7% despite a strong start to trading. Germany’s DAX slumped by 2.5% and the CAC 40 by 0.9% in Paris.

However, if that pattern is anything to go by, today could well see a recovery on Wall Street. As the European session heads into its latter stages, all of the major indices are showing strong gains.

Investors will dearly want the bull market to continue due to fears around what might potentially unfold if it does run out of steam after such significant gains against the pandemic backdrop over recent months. That could well lead to volatility over coming days and weeks while market participants try to decide on their near-term strategy.

“There’s not a lot of conviction of which way markets should go,” Patrick Leary, at Incapital, said. “We’ve priced in a great amount of reopening optimism.”