Iconic British fashion house and retailer Ted Baker has seen its share price plunge to a 9-year low today after it lost an entire 40% of its value. The investor flight came after the company posted a £23 million loss for the six months that ended on August 10th, accompanied by another profit warning. Last year the same six months had yielded a profit of £24.5 million – a swing, in the wrong direction, of close to £50 million. 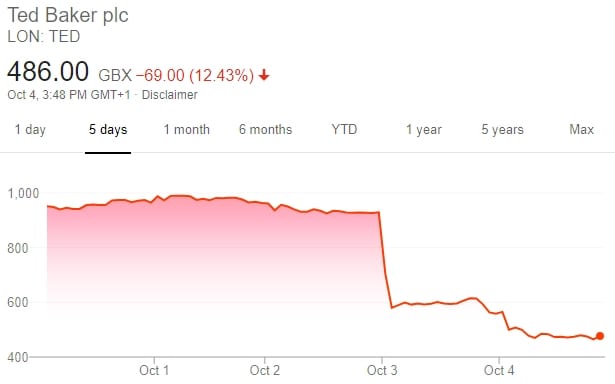 The loss was a whole £20 million below analyst forecasts and means that earlier full-year profit guidance for a surplus of between £50 and £60 million will be impossible to reach. One of the most concerning elements to the numbers issued today was that online sales were down 1.3%. Ted Baker has prided itself on multichannel offer and the contribution third-party websites make to sales figures.

CEO Lindsay Page blamed a retail environment of heavy discounting by competitors. She put “very disappointing” numbers down to the “intensely promotional landscape which we have had to respond to”.

Analysts were, however, not convinced all of the company’s woes could be put down to discounting. Jonathan Pritchard, an analyst with stock brokerage Peel Hunt pointed to the fact that the brand Ted Baker may no longer hold the same appeal as it once did:

“Our primary concern is the Ted brand is losing relevance in its target market and its price point is turning customers off. Market conditions are tough, but there are others that are performing much better.”

Former CEO and founder Ray Kelvin, who built the Ted Baker brand from a single Glasgow shop he opened in 1987 was replaced by Ms Page in 2017 following allegations of inappropriate behaviour in the workplace including “ear-kissing and hugging”. Last year no ill effects appeared to have been felt by the change. Some may point to this year’s fall into a loss as a sign that the business is struggling without its founder but analysts believe the problems run deeper than that and many date from when Mr Kelvin was still at the company.

The company’s overheads and variable costs are substantial and grew by another £17 million in the past six months. At the same time the gross margin fell from 58.3 per cent to 54.3 per cent as the deeply distressed retail backdrop forced it into discounting.

There have been rumours that Mr Kelvin may return at the head of a buyout consortium and try to take Ted Baker private again. But if the brand really has lost some of its lustre and appeal, attracting investors against the backdrop of the current retail climate could prove easier said than done.

While most still caveat the argument with the get-out clause it is far from... END_OF_DOCUMENT_TOKEN_TO_BE_REPLACED

Natural gas prices have rocketed with Russia accused of managing supply to drive up... END_OF_DOCUMENT_TOKEN_TO_BE_REPLACED

After their valuations boomed in 2020, the UK’s online fast-fashion giants of Asos and... END_OF_DOCUMENT_TOKEN_TO_BE_REPLACED

The dust has almost settled on the months-long takeover battle between U.S.-based private equity... END_OF_DOCUMENT_TOKEN_TO_BE_REPLACED