The Ted Baker share price is up 18.4% today into the late afternoon after the American private equity group Sycamore Partners Management confirmed it is in the early stages of considering a takeover bid. The New York-based firm this morning said it is looking at deal for the company which is currently valued at just £218.2 million.

Ted Baker has lost an incredible 95% of its market capitalisation since founder Ray Kelvin resigned in 2019 in the wake of a “forced hugging scandal”. The company, which was founded in Glasgow in 1988 as a single men’s shirt shop currently has 560 shops and concessions in the UK and internationally. 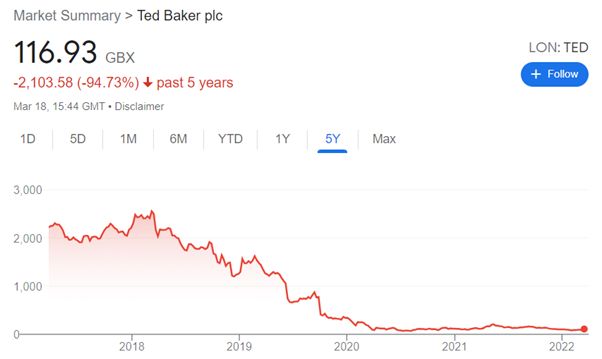 While the fashion company’s depressed valuation makes it an obvious target for private equity groups, which are currently closely monitoring the UK market for perceived bargains, Ted Baker said it hasn’t yet received any approach from Sycamore. The company is currently in the midst of a “transformation” designed to make it a “stronger and more financially sustainable business”, as it emerges from the pandemic.

The company, led by chief executive Rachel Osborne, said today that it is making good progress towards its cost-cutting targets. As well as having to move past the departure of its founder over recent years, Ms Osborne has also had to deal with the fallout from an accounting error that massively overvalued the stock on its balance sheet.

Sycamore Partners are not new to the UK’s fashion market and has previously owned the UK shoe shop brands Nine West and Kurt Geiger. It currently owns the American stationary chain Staples and has been linked to the upcoming auction for Boots. Last month it made a $9 billion takeover offer for U.S. department store chain Kohl’s.

Any formal takeover approach will have to be managed by Ted Baker without the guidance of a chairman after incumbent John Barton unexpectedly passed away in December and is yet to be replaced. The company also has a new finance chief after David Wolfe was abruptly replaced by Marc Dench earlier this month. Mr Dench has previously held positions with Joules and Global Brands.

“confident in the company’s independent prospects and would evaluate any offer for the company against the strong shareholder value creation that it believes can be delivered as a standalone company”.

For any bid, by Sycamore or other private equity firms entering the running, would almost certainly need to win the approval of Ted Baker’s largest shareholder Toscafund. The hedge fund owns 27% of the company after doubling its stake through a 2020 refinancing deal that reduced founder Kelvin’s stake to just 12%.