Tesco and supermarket peers Morrisons and Sainsbury’s to repay £1.3 billion in government support

The Tesco share price gained almost 1% in early trading today despite the UK’s largest supermarket announcing it will refund a £585 million tax break awarded by the Treasury to help it through the Covid-19 pandemic. Businesses were offered rates relief ahead of the first national lockdown period from March, as it became apparent that normal life would be restricted for some time. 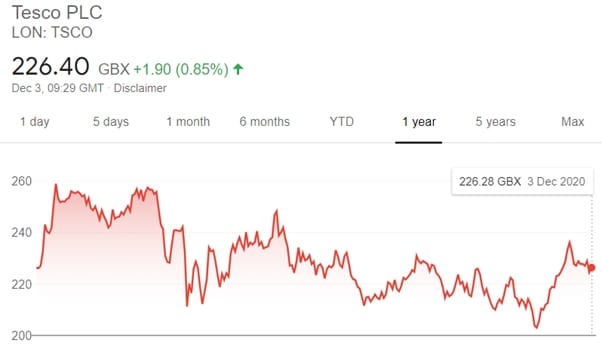 However, at the time the decision was made, it was not yet clear exactly how the pandemic would impact different sectors. While supermarkets have had additional expenses related to making their work environments safe for staff and shoppers, they’ve also benefitted from increased revenues, with people spending more time at home. That’s meant lunches, breakfasts and dinners previously consumed away from the home, either during the working week or socially, have been replaced by home-prepared meals.

Healthy financial reports over 2020, demonstrating that boost to customer spending in the UK’s biggest supermarket chains, has led to a public outcry over the tax breaks. Public opinion has turned against companies that have both accepted millions in support, while seemingly financially benefitting from the crisis. Especially against the backdrop of spiralling national debt and criticism that government support for the worst hit sectors, such as hospitality and leisure, has not gone far enough.

Tesco yesterday responded to that with the announcement that it will now refund the £585 million in tax breaks it has benefitted from this year. Rival Morrisons followed suit just hours later, followed by a similar announcement from Sainsbury’s this morning. Between them, the three supermarket chains will pay back a total of £1.3 billion in tax relief.

While retailers selling what are deemed ‘non-essential goods’, have been forced to close their doors for extended periods this year, supermarkets have continued to work, with access to food and household supplies obviously a necessity. Increased revenues have compensated for higher expenses. Tesco announced a £900 million shareholders dividend on the back of its sales boom.

Tesco chairman John Allan explained to The Times newspaper the reasoning behind the about turn, with the company’s position previously to defend both its dividend and use of tax relief:

“If you close your ears to what people are saying and hunker down and never be prepared, that’s not very wise. We really didn’t know how deep this crisis was going to be or how much we were going to have to spend.

“Although we are not making out like bandits, we will actually make less profit this year than last year, we are doing really well in comparison with a lot of other businesses. There are many businesses in far worse shape than us. Our hope is that the government uses the money to support businesses and communities that need it more than us.”