The Tesco share price has dipped by around 0.8% today, despite the supermarket chain, Britain’s largest, reporting an impressive rise in like-for-like sales over the festive period. Over the six weeks ending January 9th, Tesco saw overall like-for-like sales in the UK up 8.1% on the same period a year earlier. Online sales rose by over 80%, boosting turnover by £1 billion. 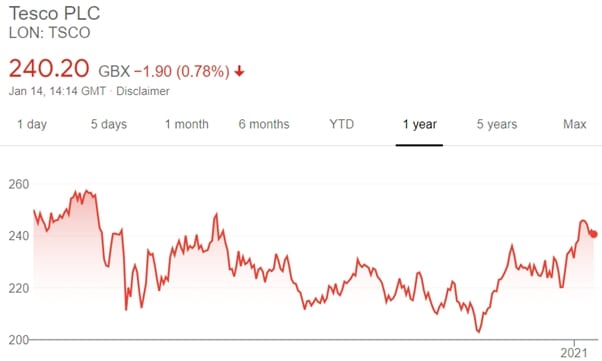 Seven million orders were delivered over the run-up to Christmas. Over the longer 19-week period to January 9th also reported on, like-for-like UK sales rose 7.2% and total group sales 7.6% to £14.69 billion.

Tesco chief executive Ken Murphy, who stepped into the role in October, said the results were good enough to qualify as “a record Christmas across all of our formats and channels”.

Online sales were, predictably given the circumstances, where the most notable improvement was. The supermarket has increased its online delivery capacity to 1.5 million orders a week, from 350,000 at the start of last year. About a quarter of online orders are for click-and-collect, which is easier for the company to fulfil and also offer improved margins compared to delivery.

Other trends reported were larger shops, with customers preferring fewer trips to the supermarket, so buying more. Christmas shopping was also moved forward by many, as shoppers looked to avoid a last-minute rush that could expose them to crowds. However, December 21st was still the busiest day of the year for Tesco, with 110 million products sold.

Mirroring reasoning offered by supermarket rival J Sainsbury last week, Tesco also reported its UK sales growth was helped along by shoppers’ desire to treat themselves to make up for an alternative Christmas that allowed for smaller gatherings and lacked the usual parties and other social events in the run-up. Tesco’s Finest range of products saw sales up by 14% on 2019. It sold 30 million packs of its Finest mince pies and 7.7 million bottles of sparkling wine, including prosecco and champagne.

But in another sign of changing consumer habits, sales of low and no-alcohol drinks were up 27% and its vegan Plant Chef range enjoyed 90% better turnover. The relaunched Clubcard loyalty programme is now being used in 80% of shops.

One negative was an 8.3% drop in sales for Tesco’s wholesale cash-and-carry business Booker, which suffered as a result of the closure of restaurants, bars and pubs due to pandemic restrictions.

Operating safely during the pandemic also saw Tesco book £85 million in additional costs related to the latest lockdown, taking total pandemic costs for the year to £810 million. Most of that was spent on hiring an additional 46,000 staff and sick leave for the average 10% of employees off ill at any given time in recent months.

The boost to income, and costs incurred by the pandemic, are expected to roughly cancel each other out. Tesco expects its retail operating profit for 2020 to match that of 2019. £585 million of business rates relief will also be returned.

Tesco shareholders will receive a special dividend worth £5 billion after the £8.2 billion sale of its Thai unit.

Brexit changes are leading to some disruption to the flow of goods like ready meals and processed meats into Ireland. However, the issue was labelled by Mr Murphy as less a crisis than a “challenge that we will overcome”.