Tesco, the UK’s largest supermarket chain, has defended its decision to go ahead with a £900 million dividend payment to shareholders. The payout announcement drew criticism against the backdrop of the £585 million saving the company has made by taking advantage of the government’s rates relief holiday, despite supermarkets enjoying a spike in sales from shoppers stockpiling and eating more meals at home.

However, outgoing Tesco chief executive Dave Lewis defended the decision, saying that every penny the supermarket has saved through the business rates ‘holiday’, is being invested in making sure the UK remains well fed throughout the ongoing Covid-19 pandemic. And he insisted that the rates relief will cover only around 50% of the additional costs operating responsibly through the lockdown is leading to.

Non-food retailers, forced to close bricks-and-mortar shops throughout the lockdown have also criticised the big supermarket chains for taking the government support package. One anonymous boss of a large non-food retail company has been quoted by The Times newspaper as insisting supermarkets “should hand the money back to the NHS”.

However, Mr Lewis estimated that his company’s extra costs will cost it between £650 million and £950 million. Tesco has hired 45,000 additional workers to keep its supermarkets operating while respecting social distancing rules. It is also paying self-isolating staff full sick pay. He also pointed out the company has neither taken advantage of the government’s VAT relief scheme nor furloughed any workers.

Tesco will pay shareholders a dividend of 6.5p=a-share, and is one of the few companies that have neither deferred nor cancelled dividends.

“The payout is reflective of last year’s performance and the strength of the business. We looked at whether the business needs more liquidity even in the most stressed scenario and it was decided we do not. We have a strong balance sheet and we do not need surplus cash.”

He also pointed out that the groceries chain did not pay any dividends for 5 years, while it filled the accounting black hold uncovered in 2014, and that it was now time to support investors who had in turn “supported the business through its turnaround”.

Mr Lewis insisted the dividend reflected the business’s performance over the period that ended 29th February, while acknowledging the changes to the economic environment that have since unfolded.

Tesco saw a 30% increase in sales over the first few weeks of March as shoppers stockpiled, while others increased their groceries bill to reflect the fact that they were eating all of their daily meals at home. More affluent shoppers in the southeast of the country made the largest contribution to the spike in sales. However, it said that the increase in groceries revenues was partly offset by a 60% drop in sales for wholesale business Booker, acquired for £3.7 billion in 2017, and the fact that its cafes and restaurants have been shut for the duration of the lockdown. 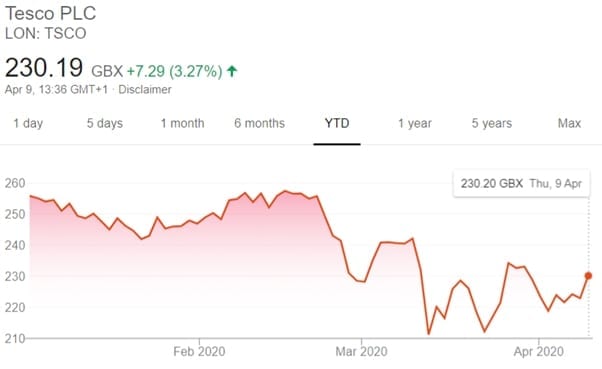 The company also reconfirmed its commitment to a special £5 billion dividend financed by the pending sale of its Thailand and Malaysia businesses. In total, the Tesco group operates 3635 supermarkets and convenience stores in the UK and Ireland and 2933 internationally, through businesses in Central Europe and Southeast Asia.

The Tesco share price was up 3.27% in early afternoon trading today.