The Tesco share price has inched up today despite the supermarket announcing an impressive leap in pre-tax profits over the first six months of its accounting year. The half-year update was also the first time new chief executive Ken Murphy had to introduce himself and address shareholders.

From stockpiling of toilet paper in the early period of the Covid-19 pandemic, to grocery bills rising as office workers started eating all of their meals from home, the coronavirus period certainly hasn’t been as bad for supermarkets as for most business sectors. And despite highlighting the extra costs involved and lower profit margins of ensuring socially distanced supermarket shopping and a leap in online deliveries, Tesco today reported a 29% leap in pre-tax profits over the 6 months to the end of August.

The half year results were today presented by new Tesco chief executive Ken Murphy, who took up his role this week. He stated that his job would now be to maintain momentum after a doubling of online food sales and pre-tax profits growth of 28.7%, to £551 million. Overall sales, excluding VAT and fuel, were up 6.6% to £26.7 billion. 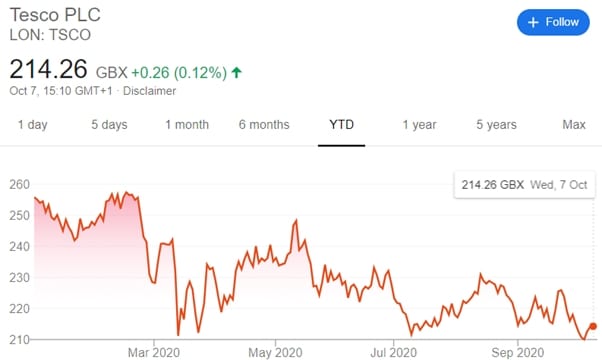 The company’s operating profits did fall 15.6% to £1.037 billion over the period but those figures were the result of losses in Tesco’s banking division, rather than its core groceries business. Retail operating profits for the full year are expected to come in as “at least the same”, as last year, despite the uncertain environment.

In his opening public comments as chief executive, Mr Murphy took the opportunity to pay tribute to predecessor Dave Lewis, who had been in the role since 2014 and negotiated a major turnaround period following an accounting scandal. Mr Murphy emphasised that it was Mr Lewis’s groundwork that meant the company was in a position to “respond to Covid in the way we have done”.

Mr Murphy also revealed that the profitability of Tesco’s online sales has improved over the past several months due to a combination of larger basket sizes and a third of online orders opting for click-and-collect rather than home delivery. He credited Tesco’s new fulfilment centre in West Bromwich as a “game changer”, in terms of how quickly online orders could be fulfilled and detailed plans for another next year in Lakeside.

Mr Murphy has spent most of his executive career out of the limelight and tends not to court publicity. However, his work is credited as having been instrumental in the expansion of previous employer Walgreens Boots Alliance. He maintained his habitual approach by stating that he also views his new role as “less about making my mark and focusing on delivering for customers”.

He added that his is

“really happy with the strategy and direction of the company . . . my job is to maintain momentum in the business and keep it focused on delivering a great Christmas.”

Despite the fact the Tesco Bank recorded a £155 million operating loss, Mr Murphy attributed the poor performance to “entirely Covid-related” factors and quashed rumours a sale may be considered.

It was also announced that chief financial office Alan Stewart, who is due to retire in April, will be succeeded by Imran Nawaz, who was headhunted from Tate & Lyle Mondelez. Tesco chairman John Allan said that the choice of Mr Nawaz was the result of an extensive search and selection process and that “he brings a wealth of skills, experience and knowledge in the food sector and will be an incredibly valuable asset to Tesco.”

Despite largely benefitting from the unexpected and unusual circumstances of 2020, the Tesco share price is down around 14% for the year. Early gains of 2.8% made immediately after this morning’s results were announced have since dropped away to marginal gain into the late afternoon. The company also announced a 21% increase in in its interim dividend to 3.2p a share.

Asia markets rise on hopes for post-election US stimulus

The private equity sector and cash-rich firms that comprise it split opinion. Some view... END_OF_DOCUMENT_TOKEN_TO_BE_REPLACED

At the end of August, The Times newspaper reported on two real estate funds,... END_OF_DOCUMENT_TOKEN_TO_BE_REPLACED

The Covid-19 pandemic has famously seen many sectors of the economy fall into two... END_OF_DOCUMENT_TOKEN_TO_BE_REPLACED

Britain, like most of the world, has traditionally been a country of milk and... END_OF_DOCUMENT_TOKEN_TO_BE_REPLACED