The Tesco share price has held steady in morning trading today after weekend reports that the supermarkets giant will match new rival Amazon’s offer for free delivery of online grocery orders. The Times reported on Saturday that Tesco plans the offer for members of its Clubcard Plus loyalty scheme. The Tesco share price started the week with a mild 0.2% dip. 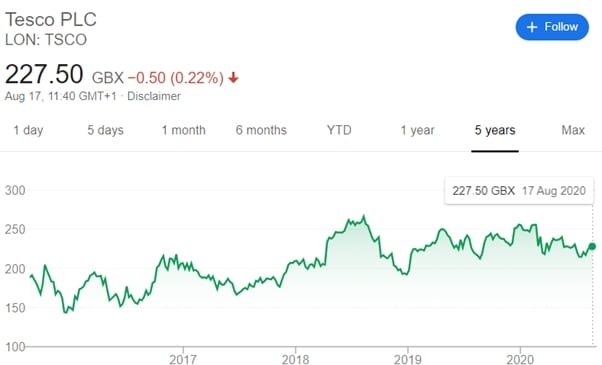 Tesco’s move flies in the face of analyst forecasts that the UK’s established supermarket chains and online-only Ocado, which works in partnership with Marks & Spencer, would refuse to enter a price war with the deep-pocketed online specialist from the USA. The consensus view was that with grocers already struggling to turn a profit on online orders, which have lower margins that in-store shops, would be unwilling to engage Amazon in a race to the bottom.

Sitting on one of the largest corporate cash piles of any company in the world, Amazon’s cash-on-hand figure was over $70 billion as of the end of June, the ecommerce giant is under no pressure to turn a profit as it chases its ambitions in the groceries sector. With a strategy that’s also focused on making Amazon Prime subscriptions as indispensable as possible, there are around 8 million subscribers in the UK, the company last month announced users of Amazon Fresh with a Prime subscription would pay no delivery fees.

At the time, NBK Retail analyst Natalie Berg was quoted as saying:

“For Amazon profitability is a choice — no other UK retailer would dream of absorbing the cost of delivery.”

The move was dubbed the “nuclear” option and designed to wipe out the profit margins of any of the big traditional supermarkets that tried to compete. But it appears Tesco is willing to take Amazon on at its own game. Its free delivery offer will also be tied to its own subscription offering. The Clubcard Plus loyalty programme also costs, like Amazon Prime, £7.99 a month and comes with perks such as twice more data on its mobile phone plans and a 10% discount on the cost of two ‘big shops’ per month.

Tesco chief executive Dave Lewis, who is due to step down in October and be replaced by Ken Murphy, told The Sunday Telegraph newspaper that the plan had always been to add deliveries to the Clubcard Plus subscription. Like Amazon Prime, the strategy is to “bring a whole bunch of benefits together” under its loyalty programme. However, Mr Lewis has also admitted that Tesco struggles to make a profit on online orders and that increasing delivery fees was the only realistic way to do so.

That presumably means that the UK’s largest groceries retailer has reached the conclusion that retaining market share of online orders is, at least in the short term, more important to it than retaining a margin on them. Tesco expects to make around £5.5 billion in online sales over 2020 compared to £3.3 billion last year.

Online orders now represent around 16% of Tesco’s turnover and a significant percentage of new online customers are expected to be retained even after the Covid-19 pandemic has passed. Many of those who hadn’t before used online services are now used to doing so and intend to keep online shops as part of their mix.

However, free deliveries from Tesco are unlikely to be offered immediately. Mr Lewis said that the supermarket would first have to “match capacity with online demand”. The surge in online demand in recent months saw Tesco increase delivery slots from 600,000 a week to 1.3 million. Despite that, shoppers have still been encouraged to buy in-store to allow prioritisation of vulnerable customers.