UK groceries giant Tesco was this morning reported to be weighing up a potential sale of its Asian businesses in Thailand and Malaysia for a price of up to $9 billion. In light of what has been described by the company as “inbound interest” in the Asian operations, Tesco has begun a review whose aim is to arrive at a figure it would be comfortable selling at. Or to reach the conclusion it would rather not divest its Asian arm. The company has stressed that review is currently at an early stage.

However, a number of city analysts believe that Tesco’s Thai business is likely to be viewed as a ‘trophy asset’ by deep-pocketed local businesses and could potentially fetch a price in ‘nosebleed territory’. Given that Tesco has, in recent years, been shifting its focus back to its ‘core’ UK business, a lofty price tag could convince it, despite the strong performance of its Asian businesses.

Less successful international businesses in Japan, South Korea and the USA have already been sold off over the past decade. The remaining international presence includes Ireland, several countries in central and east Europe, including Poland and Hungary, and the Thai and Malaysian businesses. The former is, bringing in over $4 billion in revenue over the 2018-19 accounting year, Tesco’s third largest unit by sales, behind only the UK supermarket business and Booker, the wholesale unit acquired for £4 billion in 2018.

Last year Tesco, which is the UK’s largest private sector employer with over 300,000 staff across the country, generated group sales of £56.9 billion. Around £5 billion of that was contributed by the Thai and Malaysian businesses. Tesco has over 2000 stores and employs around 60,000 staff between the two countries. 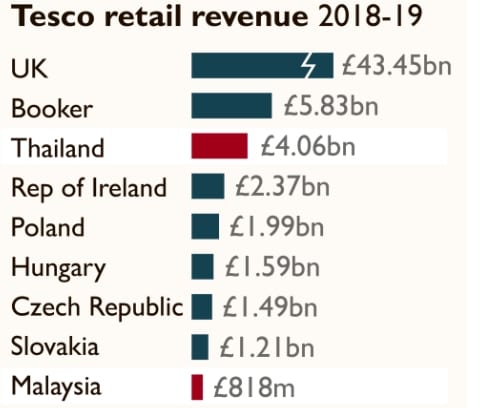 Tesco is approaching a changing of the guard next year when current chief executive Dave Lewis will step down in the summer. Mr Lewis’s time in the role can be considered a broad success, having overseen a major restructuring of the group since being appointed in 2014 in the aftermath of an accounting scandal. He has sold off a number of expensively acquired businesses not considered ‘core’ to the supermarket and convenience store focus, including the Dobbies garden centres, Giraffe restaurant chain and Harris + Hoole coffee shops.

An announcement released by Tesco yesterday to address the interest in its Thai and Malaysian units read:

“Tesco confirms that, following inbound interest, it has commenced a review of the strategic options for its businesses in Thailand and Malaysia, including an evaluation of a possible sale of these businesses. The evaluation of strategic options is at an early stage, no decisions concerning the future of Tesco Thailand or Malaysia have been taken and there can be no assurance that any transaction will be concluded.”

Tesco has had a presence in Thailand for twenty years, under the Lotus Tesco brand of supermarkets and convenience stores. Along with CP All, which holds franchise for the 7-Eleven brand in Thailand, Big C and Japanese brand Family Mart, Lotus is one of Thailand’s leading supermarket and convenience store chains by market share. Lotus is, like Tesco in the UK, the Thai market leader. In June of this year the company’s management were enthusiastic about the potential for growth with up to 750 new convenience stores seen as a realist medium term expansion target.

However, the opportunity to exit Thailand, and Malaysia, for an attractive price is obviously of potential interest. Analysts have pointed to the precedent of Carrefour’s sale of its own Thai unit in 2010 at double-digit multiple of profits as indicative that the mooted target price of around $9 million (£6.8 billion) is not unrealistic.

If a sale goes ahead before the departure of Mr Lewis next summer, it would represent the most valuable sale of his time in charge by some distance. His replacement will be 52-year-old Ken Murphy, who has spent most of his career with the Walgreens Boots Alliance. If Tesco does achieve a price close to $7 billion, it would be almost double the £4.2 billion brought in by the 2015 sale of the company’s South Korean business. It would also be more than the total market capitalisations of UK rivals Wm Morrison and J Sainsbury, which are both currently valued at just under £5 billion. 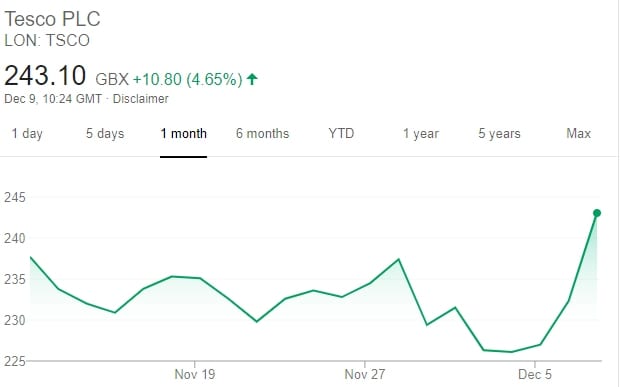 The Tesco share price has opened up trading today with a 4.65% gain on the news. Any eventual sale of the Asian businesses would be expected to see shareholders benefit from significant returns in the form of a special dividend.

UK groceries giant Tesco was this morning reported to be weighing up a potential... END_OF_DOCUMENT_TOKEN_TO_BE_REPLACED