Electric carmaker Tesla yesterday saw another 6.5% added to its share price, taking it beyond $2000 for the first time. The most recent surge in the company’s value, Tesla’s share price has gained a phenomenal 45% in just 10 days since August 11th, means the company’s value has now more than doubled since mid-June. The company is now worth just over $373 billion, up from $185 billion in mid-June. 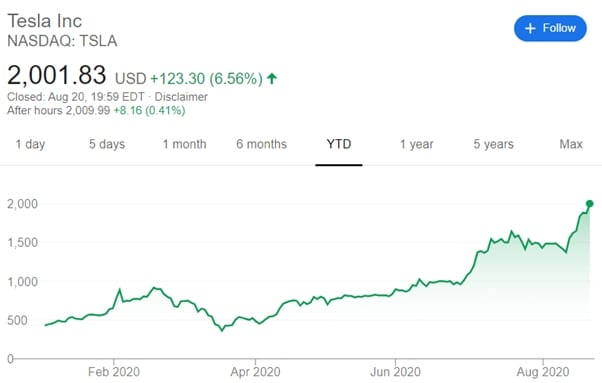 Last month Tesla became the most valuable car manufacturer in the world, after it overtook Japan’s Toyota, with the latter valued at around just $221 billion, despite generating many times the revenues and profits of the former. Tesla’s giddy valuation in based on an assumption that it is best placed to dominate the future electric vehicle market. The company has also invested hundreds of millions of dollars in developing automated vehicles technology and is one of the leaders in the race towards driverless cars.

After a lull in July, the Tesla share price gains accelerated again earlier this month after the company announced that it would split its shares. The split was announced on August 10th, and today every holder of $2000 Tesla shares will receive four additional shares for each they own. The five shares should start trading at around $400 each, a fifth of the value of a single $2000 share at the time of the split.

Companies tend to split shares after they reach a particularly high value. The idea is to make owning Tesla shares more accessible to a wider range of potential investors, with $2000 as the minimum entry level for a single share in the company too rich for many.

Another catalyst driving Tesla’s share price higher is the presumption that the company will be added to the S&P 500 index in the near future. A sustained run of four consecutive quarters in profit should see the review committee rubberstamp Tesla’s accession to the benchmark index when they meet in September. Being part of the S&P 500 automatically increases demand for a company’s shares as many investors, including large institutional investors such as pension and insurance funds, track the index.

Tesla’s share price has risen by a phenomenal 300% so far over the course of 2020. The company’s valuation does, however, currently look stretched at 148 times expected earnings.

CEO Elon Musk owns 21% of the company and is widely credited with driving its value to such heights, despite almost constant market scepticism over the years. At various points, Tesla has been the most shorted company in history. It’s now worth more than the combined value of General Motors, Ford and Fiat Chrysler, the USA’s big three traditional car manufacturers.

Tesla is less than 20 years old, with the company founded by engineers Martin Eberhard and Marc Tarpenning in 2003. Mr Musk was the company’s first major investor, leading an investment round in 2004 with $6.5 million of his own cash making up the bulk of a total $7.5 million raised.

The company’s new manufacturing plant in Shanghai will, according to reports yesterday, see Model Y vehicles rolling off the production line from 2021.