The Tesla share price gained 2.2% yesterday ahead of the electric car maker releasing its latest quarterly result. The announcement of the company’s first $1billion profit has since added another 1.5% during after-hours trading ahead of Wall Street opening this afternoon.

The headline profit figure of $1.1 billion was significantly ahead of analyst expectations with revenues of $12 billion, over double those over the same period last year, also a solid improvement on expectations for $11.3 billion. 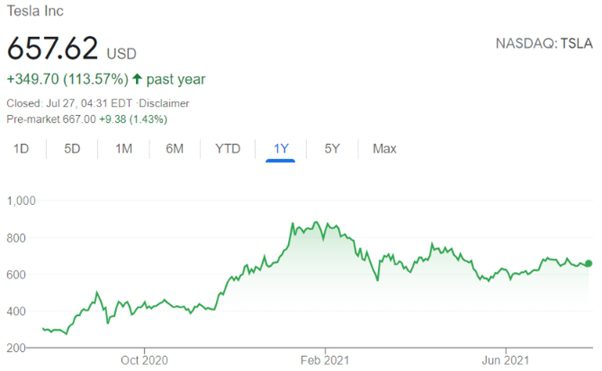 Net income, said Tesla, “exceeded $1 billion . . . for the first time in our history”, as the company managed to deal with the global semiconductor chip shortage and other supply chain issues to ship over 200,000 electric vehicles.

Tesla still expects to see vehicle deliveries growth of over 50% this year despite the semiconductor chip and other supply chain issues affecting the wider auto manufacturing industry. The company said it had “worked extremely hard to keep production running as close to full capacity as possible”, despite the logistics challenges.

Supplies of semiconductor chips used in the electronics of Tesla models will, said chief executive Musk, be the most critical factor in the number of vehicles the company will be able to deliver this year. He commented:

“The global chip shortage situation remains quite serious. It does seem like it’s getting better but it’s hard to predict.”

The global supply chain crisis has also seen Tesla announce the push-back of the launch date for its highly anticipated Semi pick-up truck to 2020. The company said the delay had been forced by “the limited availability of battery cells and global supply chain challenges”.

With a value of over $600 billion, Tesla is the world’s most valuable car manufacturer by some distance. However, markets are valuing the company on its future potential as the market leader in a future all-electric car market rather than on current sales numbers revenues and profits, which still significantly trail those of the large traditional manufacturers.

Key to keeping investors believing that they should hold onto their shares at current valuations is maintaining a rapid pace of growth. That will have to be achieved by increasing manufacturing capacity from the current main facility in Fremont, California and Gigafactory in Shanghai, China. Production is on track, Tesla updated yesterday, to begin at new factories in Berlin and Texas before the end of this year.

Tesla is targeting an annual growth rate for vehicle deliveries averaging 50% over the next several years. However, the two new facilities coming online means there will be a much larger leap this year.

It booked a $23 million impairment related to its holdings in bitcoin.