The Tesla share price has fallen 5% in after hours trading today, extending losses for 2022 to over 35% despite a recent upturn. The new drop came after Reuters reported an email sent by chief executive Elon Musk to staff on Thursday. The email communicated to staff that all hiring activity should be frozen and 10% of existing jobs worldwide cut because Musk had, he wrote, “a super bad feeling about the economy”.

Tesla has, according to the company’s most recent annual filing to the US Stock Exchange Commission, around 100,000 employees worldwide, which means the loss of around 10,000 jobs. There were no further details in the email regarding particular roles or locations to feel the brunt of redundancies. 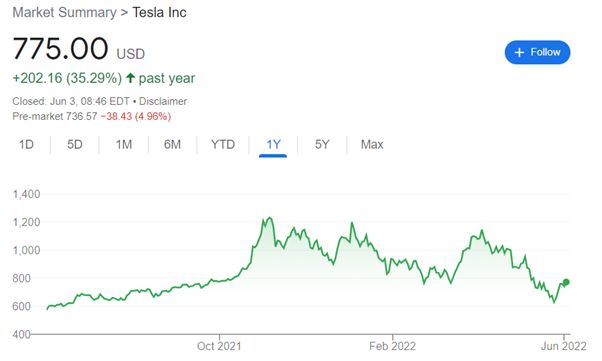 Musk also made headlines earlier this week when he told the company’s non-factory staff that they should return to the office, and specifically the office their role is based rather than any Tesla office, for at least 40 hours per month. He followed that up with a tweet that any remote workers unwilling to return to the office “should pretend to work elsewhere”.

However, despite the media coverage of the announcement, Musk appears to have tacitly requested a hybrid work structure that allows staff to combine home office arrangements with the workplace. 40 hours a month works out as staff having to spend less than a week a month in the office.

Musk has been gloomy on the U.S. economy’s prospects before this week, telling the audience of Miami’s All-In Summit in late May that he felt the economy was “probably” already in recession, adding:

“It’ll probably be some tough going for, I don’t know, a year, maybe 12-18 months. The honest reason for inflation is that the government printed a zillion amount of more money than it had. This is not like, you know, super complicated.”

Currently, Tesla is advertising around 5000 vacancies worldwide on the professional social network LinkedIn, including new roles at its recently-opened Gigafactory for batteries near Berlin. Despite a dip in inflation recently it is still running at 8% compared to around 5% a year ago. That’s 4 times the Federal Reserve’s target rate of 2% and described by the White House as “still too high”.