Tesla has seen its share price jump over 17% in pre-market trading today before the market opens on Wall Street following a surprise announcement of a quarterly profit. It’s only the fifth time in Tesla’s 16-year history it has recorded a profit over any three-month period and nine months since the last time the feat was achieved. It’s also a welcome break after a combined loss of $1.1 billion over the first two quarters of this year – a reversal of fortunes after the second half of 2018 became the first period to yield consecutive quarterly profits for the electric car maker.

A profit of $143 million was booked for the three months between July and September. The pleasant surprise saw Tesla recover a chunk of the 23% of its value it had lost over 2019 so far. 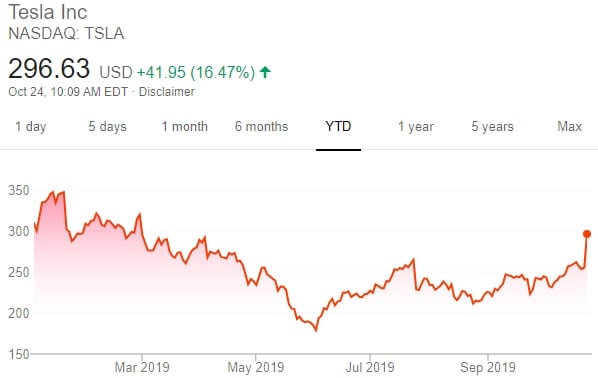 Despite its relatively low turnover and struggle to turn a profit, Tesla is one of the USA’s most valuable carmakers. It has regularly held a market capitalisation higher than that of the biggest traditional carmakers, including Ford and General Motors. After today’s gains, Tesla’s market capitalisation is more than $20 billion higher than Ford’s and a few billion more the GM’s. Both companies sell many multiples of the car numbers Tesla does as well as consistently recording healthy profits. Tesla’s lofty, many would argue incomprehensible, valuation is based on investor belief that it is well positioned to be a dominant force in a future market where electric vehicles are the standard. Tesla is also a leader in the development of autonomous vehicles technology.

As well as manufacturing a number of electric car models, Tesla also has smaller power storage and solar energy units. For once, Tesla’s has delivered ahead of promises made by its co-founder and CEO Elon Musk, who has a history of missing ambitious targets. But this time he has under-promised and over-delivered after he stated in July he expected the company to break even over the third quarter before managing a profit in the fourth.

The company said the surprise profit, achieved despite it dropping the sales price of its Model 3, was achieved by better cost efficiencies including improved production schedules and a lowering of operating expenses. One slight dampener among the positives was a first year-on-year decline in revenue growth, with a turnover of $6.3 billion compared to $6.82 billion over the same three months of 2018.

That the international travel sector is, thanks to the Covid-19 pandemic, in a bit... END_OF_DOCUMENT_TOKEN_TO_BE_REPLACED

With a growing number of economists arguing there is a high chance we are... END_OF_DOCUMENT_TOKEN_TO_BE_REPLACED

While most still caveat the argument with the get-out clause it is far from... END_OF_DOCUMENT_TOKEN_TO_BE_REPLACED

Natural gas prices have rocketed with Russia accused of managing supply to drive up... END_OF_DOCUMENT_TOKEN_TO_BE_REPLACED

After their valuations boomed in 2020, the UK’s online fast-fashion giants of Asos and... END_OF_DOCUMENT_TOKEN_TO_BE_REPLACED