The Tesla share price has slumped 7.7% in early trading on Wall Street today despite the market-leading electric cars company publishing record quarterly sales to end what it described as a “breakthrough year” in 2021. Tesla not only delivered record sales but also beat analyst revenue forecasts by racking up 65% year-on-year growth to bring in $17.7 billion.

Net profit also increased to $2.32 billion from just $270 million a year earlier for the three months to the end of December. The company also promised investors it will continue to expand production as quickly as possible this year while highlighting the reality of a backdrop of continuing global shortages of components and materials that may hinder efforts. 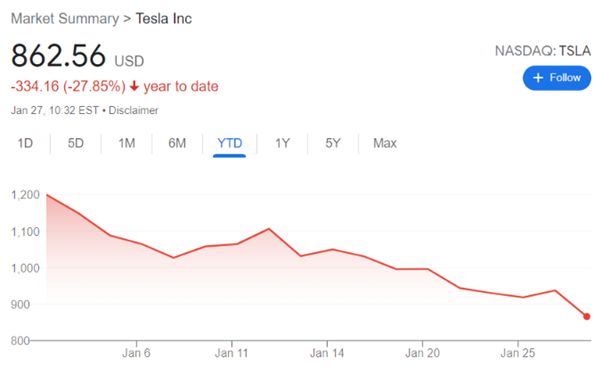 Tesla’s factories have been running below their capacity over the past several months with supply chain disruption blamed as the “main limiting factor”. However, despite the challenges, the company still managed to deliver 308,600 vehicles over the final quarter and 936,172 for the year. That represented 87% growth on 2020 delivery figures.

Chief executive Elon Musk updated investors on progress towards production of its much-anticipated Cybertruck electric pick-up truck model. He said that production and deliveries would start “hopefully next year”. Trying to introduce new models this year, which would involve setting up new production lines at its factories would have, said Musk, reduced overall output.

With Musk notoriously bullish and often over-optimistic when it comes to timelines and production targets, investors may be concerned about what a conservative “hopefully next year” might mean in reality. Unless he’s suddenly decided to adopt a new approach of “under promise, over deliver”, in stark contrast to his historical record, the muted prediction might be interpreted as really saying “it’s not impossible but probably not next year”.

There appears to be a disconnect today between the reaction of analysts to Tesla’s results and investors. Most analysts either maintained their price targets and guidance on Tesla or raised the former. Meanwhile, judging by today’s share price drop, investors don’t appear to have been overly impressed by the record figures. The uncertain forward guidance on when production of the Cybertruck might realistically start also seems to have disappointed.