Having been surprisingly denied an expected an expected induction into the benchmark S&P 500 index at the last time of asking, the Tesla share price has opened almost 10% today after it was confirmed the electric car maker will finally be brought into the fold. As of next month, Tesla will be an S&P 500 constituent, and its share price will benefit from a boost in demand as index trackers include it in their portfolios. 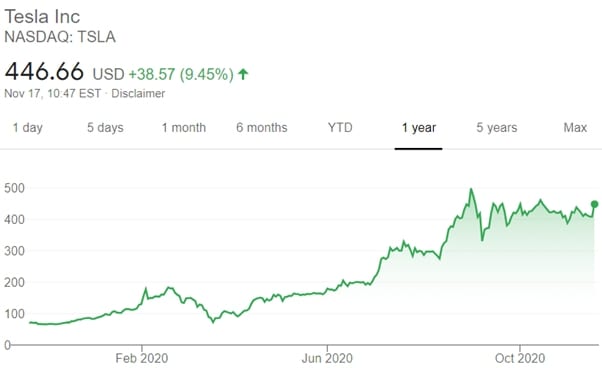 Today’s early gains add to a huge 14% surge in the Tesla share price yesterday, following the announcement. As of yesterday’s market close, the company was worth over $387 billion. If today’s gains hold, its market capitalisation will be propelled well above $400 billion. Despite still generating a fraction of their revenues, Tesla is now worth more than the combined value of the traditional ‘Big Three’ of U.S. automanufacturing – General Motors, Ford and Fiat Chrysler. It’s also worth considerably more than Toyota, the biggest automaker in the world by sales and revenue.

Tesla had hoped to be brought into the S&P 500 back in September, having met the admission criteria by that point, but was overlooked by the Index Committee at S&P Dow Jones Indices. Criteria for admission include constituents of the index being based in the USA and listed on either the Nasdaq, NYSE or Chicago Board Options Exchange and having a market value of at least $8.2 billion.

The one criteria that Tesla failed to meet for a long time, despite a soaring valuation, is the requirement that members of the index have reported at least four consecutive quarters of profit. Last month, after posting third quarter profits of $331 million, Tesla passed the milestone of 5 straight quarters of profits.

The company, perhaps best known for its high profile and sometimes controversial CEO Elon Musk, was originally founded in 2003 by the American engineers Martin Eberhard and Marc Tarpenning. Mr Musk, who currently owns 21% of Tesla’s stock, was an early investor, putting in $6.5 million in early 2004. Musk is now thought to be worth around $91 billion.