Despite some anticipation that the electric car maker’s debut as a constituent of the benchmark S&P 500 index would fuel yet more gains, the Tesla share price yesterday dropped by 6.5%. The company, now the most valuable automaker in the world, has seen its share price gain by almost 700% this year with investors backing it to lead an all-electric future for road vehicles.

Some of those gains were also in anticipation of induction into the S&P 500, which would increase demand for Tesla shares by putting it on the default shopping list of the hundreds of billions of global capital tracking the U.S. benchmark index. But as Tesla actually graduated to the S&P 500 yesterday, its share price actually dropped. 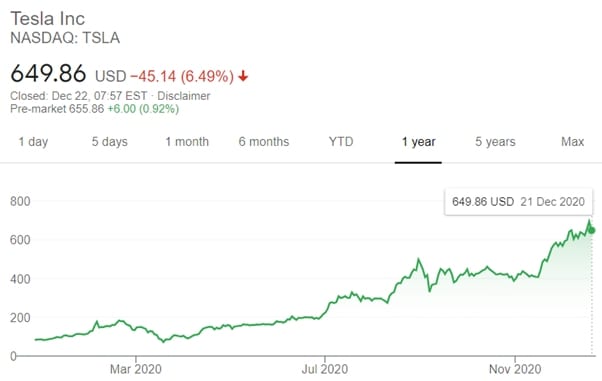 Tesla’s first day as a member of the S&P 500 saw its share price fall by $45.14 to $649.86. Investors who had been sitting on 2020 returns of over 700% from Tesla probably won’t be too concerned. And those who bought shares just after the company went public in 2010 certainly won’t. They’ve realised returns of around 14,000% since on their original investment.

With a market capitalisation of over $660 billion before markets opened yesterday, Tesla became the largest ever company to be inducted into the S&P 500, which is considered the best gauge of America’s biggest public companies. Despite its soaring valuation, Tesla has only very recently recorded a full year of consecutive quarters of profit – a requirement for consideration for the index.

However, despite the fact S&P Dow Jones Indices, the company that maintains the S&P 500, said index-tracking funds had snapped up $90.3 billion of Tesla stock ahead of close of market Friday, its valuation dropped yesterday. Presumably the result of profit taking by investors aware that index-trackers buying would push up Tesla’s valuation ahead of it joining the benchmark index. But that the effect would be most prominent in the run-up to the event.

Tesla’s current weighting as part of the S&P 500 means that the index will move by 1 point for every $11.11 move in the Tesla share price.

Elon Musk, the company’s CEO and an early stage investor in Tesla, has become the world’s second richest man behind Amazon boss Jeff Bezos this year thanks to the extraordinary rise in the company’s value. Mr Musk and a handful of other senior management figures still own around a fifth of the company’s stock between them.

Many stock market analysts believe that despite Tesla’s undoubted success over the past couple of years, and what looks like a bright future, the company is massively over-valued. Even Mr Musk himself said earlier in the year he felt the company’s share price was too high. At the time, in April, it was a fraction of the $650 it has since reached. There is a feeling that armchair investors who are fans of Mr Musk have pushed up the company’s valuation to above what any normal metrics suggest it should be.

But even the professionals disagree. JP Morgan recently called Tesla’s 2020 share price games a bubble driven by “speculative fervour”, and said $90 would be more realistic fair value. At the other extreme, rival Goldman Sachs has put a price target of $780 on Tesla’s share price.