Tesla co-founder and CEO Elon Musk is not, it is fair to say, a fan of stock market ‘shorters’. In fact, he has railed against the practise on a number of occasions and highlighted shorting of Tesla’s stock as one of the reasons why he threatened to take the company private last year. So he probably won’t be shedding any tears at the news that hedge funds that hold short positions on Tesla’s share price have taken losses of $575 million after it moved to its highest level in over a year.

Tesla’s stock has been a particular target for short sellers who believe that the company’s racy valuation, more than either Ford or General motors which generate much greater revenues and are profitable, is inflated. The company’s valuation can be seen as much more of a sign of investor confidence of its profitability in a future all-electric automobile market than a reflection of its current financials.

But other investors believe that Tesla’s valuation is greater than it should be and a hype-filled bubble. That’s not been helped by the company regularly missing ambitious production and delivery targets it has set itself in the past. Some are willing to back their belief that Tesla is overvalued by taking out short positions. That involves paying a fee to ‘borrow’ Tesla stock from big investors that hold it, selling it and then hoping they will be able to buy it back at a lower price at the point the loan expires.

The tactic hasn’t worked out over the last few months as Tesla’s share price has performed strongly. And last week the stock’s value soared after one of the electric car-makers most prominent Wall Street critics made positive comments on Tesla’s future prospects. Credit Suisse analyst Dan Levy, who has often criticised the company’s valuation as overblown, said that Tesla can be considered as a market leader “in the areas that will likely define the future of carmaking — software and electrification”.

And Levy is not the only respected Wall Street analyst to add some positive sentiment on Tesla’s progress. Colin Rusch of Oppenheimer also commented on the positive progress at the company’s new Shanghai factory, with pictures cars fresh off the production line being published by several media.

The result was a 7% intraday gain for Tesla’s share price on Monday. It touched its highest intraday level since August 2018 before closing at $381.50, taking gains for the year to around 14%. That’s seen long term shorters of the stock lose around $1.85 billion altogether, according to data from financial markets analysts S3 Partners. 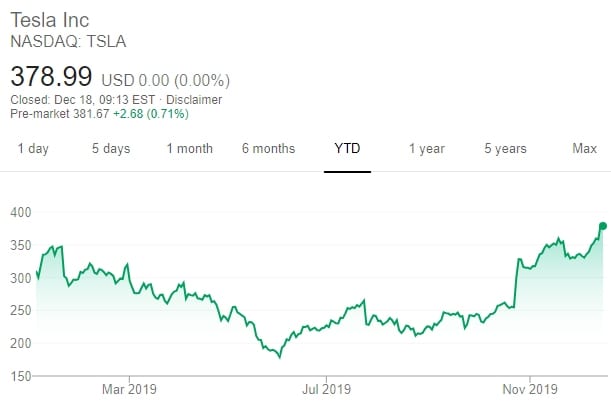 Tesla remains one of the most shorted companies on Wall Street, with around 19.1% of its exchange traded equity currently being shorted. That is considerably lower than May’s high of 37.3%.

One cloud to move across Musk’s undoubtedly sunny mood will, however, have been news the U.S. government have declined to extend tax credit to anyone who buys an electrical vehicle (EV). That led to a 0.7% drop in the Tesla share price to $379.

Switching from a residential to a buy to let mortgage

Natural gas prices have rocketed with Russia accused of managing supply to drive up... END_OF_DOCUMENT_TOKEN_TO_BE_REPLACED

After their valuations boomed in 2020, the UK’s online fast-fashion giants of Asos and... END_OF_DOCUMENT_TOKEN_TO_BE_REPLACED

The dust has almost settled on the months-long takeover battle between U.S.-based private equity... END_OF_DOCUMENT_TOKEN_TO_BE_REPLACED