With strict lockdowns now expected to persist across much of Europe, the USA and other parts of the world, including here in the UK, for at least the first 2-3 months of 2021, there will be no quick recovery. Vaccinations roll-out will hopefully have things returning to normality by late spring or early summer. But we will still have at least another few months of devastating consequences for many sectors, particularly travel and tourism, hospitality and energy.

Yet despite that, international stock markets finished 2020 to gains. Not everywhere. The London Stock Exchange closed last year down around 13.5% on where it finished 2019. 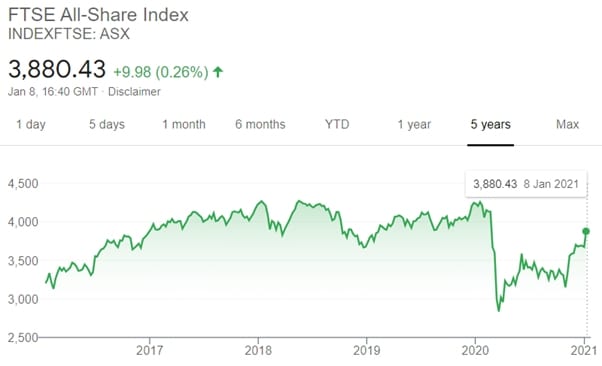 Europe’s broad-based Euro Stoxx 600 index, which also includes London-listed companies, was down a little over 5% for the year.

However, while there are arguments that both those 2020 losses (with Brexit uncertainty also a major contributing factor) were milder than could have been expected, global indices actually recorded gains for 2020.

The MSCI World index, which tracks the developed world economy, finished 2020 over 13% up on the level it closed out 2019 at. 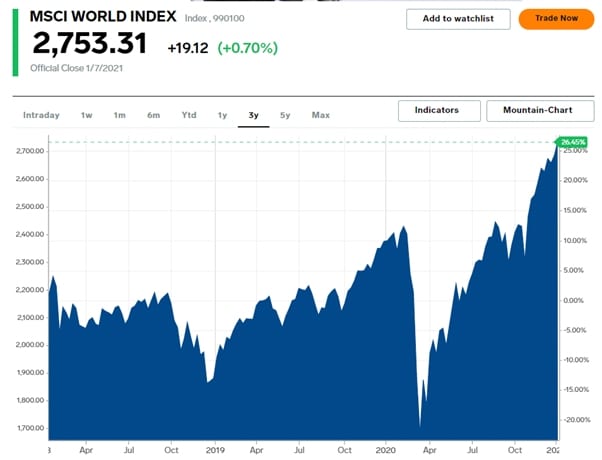 But why did investors drive stock markets higher, despite a global economic catastrophe unfolding around them? There were, as always, multiple factors at work. And many analysts believe 2020’s stock market performance was, broadly speaking, illogical. But the most significant driver of overall international stock market gains was the technology sector.

Lockdown restrictions accelerated the trend towards a more digital economy. We relied more than ever on digital communication and productivity tools as many of us worked from home. And left with little alternative over much of the year, we spent more money on digital entertainment, like streaming services and video games.

Unable to visit ‘non-essential’ shops for periods, with many consumers discouraged from returning even when they reopened, ecommerce businesses also enjoyed a bumper year. Even groceries shopping moved more online, with orders for delivery increasing by well over 100% for most supermarkets here in the UK.

The result of all of that increase in spending in the digital economy was investors piling into technology stocks with as much enthusiasm as they had piled out of risk-based financial markets in March, when the seriousness of the pandemic first became clear. With interest rates at rock bottom, the traditional ‘flight to safety’ investment options, high quality fixed income investments like government treasury notes, have also been unattractive. Investors put their money into technology companies instead. The sector has become a safe haven.

The result was the tech sector enjoying its best year ever, as evidenced by the eyebrow-raising 43% gain for the tech-centric Nasdaq index over 2020. 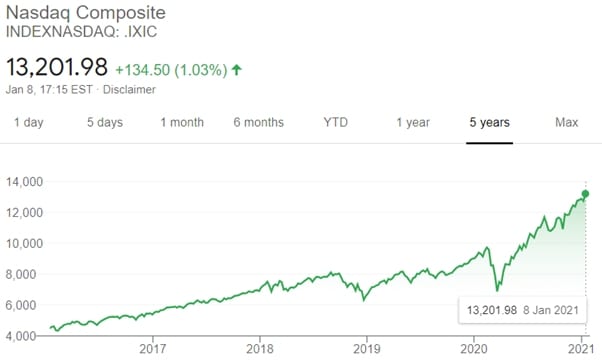 Some of the biggest individual valuation gains recorded by companies in 2020 were those of the biggest technology companies. Amazon, the ecommerce and cloud computing giant, gained almost 75% over 2020. Video content streaming platform Netflix added 64% growth to its valuation. And video conferencing software Zoom Video Communications gained over 400% for the year.

But all of those gains pale in comparison to those of electric car maker Tesla, despite the fact that we travelled a lot less in 2020. The company’s valuation soared by a mind-boggling 720%. Gains since the end of 2019 have extended to 920% since the beginning of 2021. 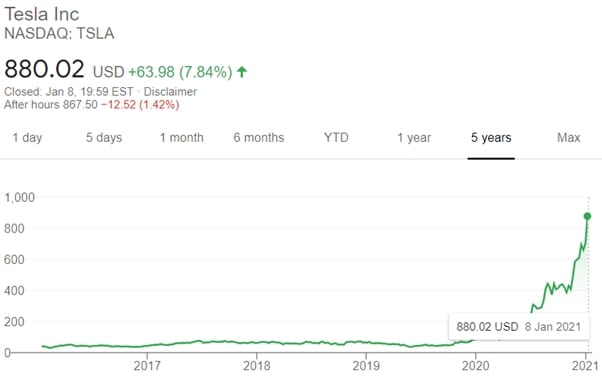 Many analysts are now calling a tech-fuelled stock market bubble comparable to the dotcom boom. Which was followed by the dotcom crash in 2020. Last week, Jeremy Grantham, the British co-founder of major Boston-based asset manager GMO, said that he is now certain stock markets, especially ‘growth’ technology stocks, are in an ‘epic’ bubble, that will inevitably burst, sooner or later.

Others believe that the way markets assign value to the most successful, or prospective, technology stocks has simply changed. And that the change is a justifiable one, because the growth opportunities enjoyed by successful technology companies are so much greater than those that were realistic for non-digital companies of previous eras.

There is certainly merit to that argument. Even the most successful bricks-and-mortar retailer, like the USA’s Walmart, was practically unable to dominate international markets in a way comparable to how Amazon does today. And even the biggest media companies and producers, like Disney or Fox, were unable to scale across international markets in a way comparable to Netflix’s streaming service. Which is why many are now trying to replicate that success with their own streaming services.

The digital business models of big tech companies allow for global scalability at a level previously unthinkable. That’s hard to argue against.

For sceptics, that reality can be accepted without it justifying the extent of the recent valuation gains enjoyed by the tech sector. They argue that the premium markets are now assigning to future revenues growth potential is so huge, it has to represent a big risk. These are prospective, not certain, revenues. And tech valuations don’t seem to reflect any degree of uncertainty, which can’t be realistic. They won’t all follow through on that potential, for all sorts of reasons.

Longer term, it is difficult to know who will be proven correct. My personal feeling is that tech valuations are genuinely now in nose-bleed territory. But that doesn’t mean there is not also the potential for big tech to get even bigger in 2021. Even if a correction follows somewhere along the line.

The Covid-19 pandemic will continue deep into 2021. And the digital transformation of the global economy will also, as a result, continue at an accelerated pace. Cash from stimulus programs will flood the system, and with fixed income investments so unattractive, much of it will find its way into stock markets and other risk-based investments like venture capital and private equity.

A major correction may well come, but it is not guaranteed. And in the meanwhile, there are positives for tech which could see gains extended. Let’s take a look at just some of the reasons why big tech could keep getting bigger over the year ahead.

With the company’s cloud computing unit set to continue to grow strongly for years to come, and assaults on major new markets like online groceries and pharmaceuticals already underway, Amazon could well keep getting bigger still.

The company’s next big business is tipped to be a courier service that will challenge the likes of FedEx, DHL and UPS. The Seattle-based giant has been building towards launching a proprietary courier service to deliver its own huge volumes of packages, as well as cater to third-party clients.

An air fleet is being built up and 100,000 delivery vans ordered. Many analysts believe 2021 will see Amazon launch an all-out attack on yet another industry – shipping. They argue a fully-fledged shipping company is the next logical step for Amazon. And that the cash pile the company has built up will see them undercut big rivals on price to quickly seize market share.

Stock market experts and analysts calling a tech valuations bubble most frequently highlight the valuation of electric car maker Tesla as indicative of markets ignoring logic. And the company finishing 2020 as the most valuable car manufacturer in the world, despite much lower revenues and profits than traditional rivals, lends credence to that call.

Especially against the backdrop of a decade of losses until the last year. And current profits only being realised because other car companies are forced to buy ‘carbon credits’ from electric car makers, to compensate for their own petrol and diesel sales.

But Tesla’s valuation departed from traditional fundamentals a long time ago. There is no obvious reason to suppose that will change in 2021, despite last year’s eightfold rise in stock market valuation.

Tesla only just missed its ambitious 2020 target to manufacture 500,000 vehicles, and those numbers will rise again next year. That, and a healthy dose of FOMO, could well see the same small investors that have driven Tesla’s 2020 gains pushing the company’s valuation even higher this year. Some analysts believe that a 2021 Tesla valuation passing $1 trillion is, at this stage, far from unforeseeable.

With an end to the Covid-19 pandemic hopefully achievable by around the mid-point of 2021, it might be expected that there will be a drop-off in demand for video-based businesses. We won’t need as many Zoom subscriptions when we can go back to the office. And can Netflix maintain its pace of growth after lockdown, especially with increased competition entering the streaming sector as traditional media companies fight back?

Valid points, but many analysts are convinced video is here to stay and that many of the developments of the past 12 months won’t simply roll back, at least not entirely, once the pandemic is over.

Many investors are banking on a continuation of the video trend and huge sums of capital are flowing into new video-based start-ups that are convinced they can reshape almost every existing industry on a more digital footing. One investor quoted in The Times newspaper comments:

“The next trillion-dollar start-up will be a video-first company.”

One of the biggest threats to the continued growth of big tech, one which pretty much every analysis of the sector pinpoints, is a regulatory crackdown. In the USA, Washington has recently stepped up its attack on big tech. Both Facebook and Google were last year sued for antitrust issues. Apple and Amazon are also being investigated by Federal prosecutors and it won’t be a surprise if 2021 sees both also hit by government-backed lawsuits.

EU regulators are also trying to clip the wings of big tech, and would love to see many of the largest companies broken up or their dominance otherwise curtailed.

But there is doubt as to whether then new Biden administration will pursue big tech in the same way as the Trump administration did. And even if attempts at a regulatory crackdown continue, the biggest tech companies have very deep pockets from which to fund their defence.

Big tech might eventually be brought to heel by regulators, but attempts to do so are likely to drag on through courts for years. It is very unlikely anything major that would genuinely slow the growth of the biggest tech companies will happen in 2021. It is more likely to be another big year for Silicon Valley.

None of the above is to say the tech sector is not at risk this year. Valuations are astronomical, judged against any traditional metrics. But these are also not traditional companies. We could be in a new tech bubble, though there are, as we’ve seen, also arguments that dispute that perception.

But even if we are in a tech stocks-fuelled stock market bubble, there is no guarantee it will pop in 2021. There’s a very significant chance that big tech will finish another year even bigger than it started it.