The case for investing in social housing: an ethical alternative to bonds with better upside?

With bond yields at historical lows, they are not a particularly attractive investment for anyone investing for growth and not just capital preservation. And after the end of a 40-year bull market earlier this year, they are not expected to significantly improve any time soon.

But even growth investors are usually advised to hold at least some of their portfolio in boring, safe, capital-preserving fixed-income investments like bonds. They steady the ship during periods of stock market turbulence and reduce overall volatility, which is also important to long-term returns.

Investment-grade government bonds are the default choice for that type of low risk, fixed-income investment. But there are alternatives, especially for younger investors willing to take on just a small amount of increased risk. One of these alternatives has the added advantage of qualifying as an ethical investment – social housing REITs.

Why invest in REITs

As an investment, property funds are traditionally seen as steady and unexciting but a good reliable source of income. REITs, real estate investment trusts, are obliged to distribute at least 90% of their taxable income to shareholders via dividends. If they don’t distribute that income they pay tax on it so there is a strong incentive to do so.

The result is REITs tend to be among the most consistently strong dividend payers for income investors. They can also offer capital returns in a strong property market as the value of their real estate assets rises. And the opposite is of course true in a weak real estate market.

But the main attraction of REITs is a steady stream of rental income. As long as that holds up, long term investors don’t have to worry too much about property market fluctuations.

If you are a younger investor or still at least a decade away from retirement there is a high chance the majority of your portfolio is currently invested in equities. And a majority of your equities allocation is most likely tied up in ‘growth stocks’ – shares that don’t provide much of an income by way of dividends but whose returns are expected to result from an increasing value as the company generates more revenues and higher profits.

The risk of investing in REITs

Most REITs, especially the larges ones, invest in commercial property including retail space, offices and logistics real estate like warehouses. That exposes them to economic cycles.

Typically, when the economy is booming there is plenty of demand for offices and retail space. That pushes both rents and property valuations up, which benefits the REITs which own them.

But commercial property rates are currently in the middle of an existential crisis. Retail has been hit especially hard by the pandemic, accelerating the existing trend towards online shopping. British Land, the UK’s largest property REIT, received just 46% of the rent it was due from its retail tenants for the 3 months from December 25th 2020.

The British Property Federation (BPF) has estimated that commercial property landlords could see rent arrears reach as much as £7 billion as a result of the pandemic, which has seen office and retail buildings lie empty for much of the past 14 months. In the UK, there has been a moratorium on evictions over much of that time.

Many tenants will either make up late rental payments or agree on a compromise for the pandemic period. But much of the arrears will also simply be lost and have to be written off. That’s rental income that would have been paid out to REIT investors as dividends. Most of the sector does periodically suffer as economic cycles turn negative.

“We remain of the opinion that the majority of UK retail is over-shopped and under-demolished. The simple truth is that retail stores remain at a fundamental and irreversible disadvantage to online competition.”

“People who talk about [repositioning retail properties] are those who tend to have a load of retail they don’t know what else to do with.”

Why social hosing REITs are different

But what if there were REITs who rented out the kind of property whose rental income is not typically affected during periods of recession or shifting economic and consumer patterns? There’s a strong argument that’s exactly what social housing REITs represent.

Between capital gains and dividends, Civitas increased its dividend by 6% last year and 1.9% this year, both social housing REITs have returned a solid 5% per annum since launching and that’s expected to be the minimum that can be relied on up long term. Neither saw rents go unpaid over the pandemic. Ratings agency Fitch recently upgraded Civitas’s credit rating to investment grade because its income is practically guaranteed by the UK government. 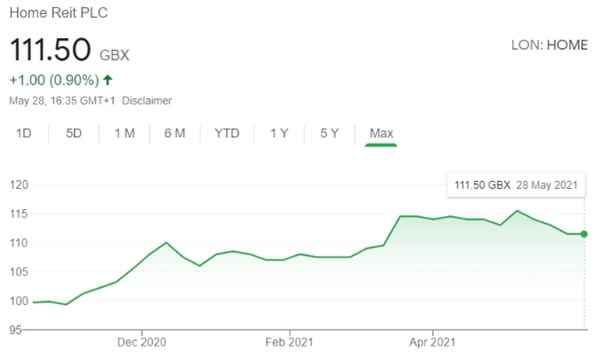 A third social housing REIT of a slightly different nature, Home REIT, which provides accommodation for the homeless and listed in October 2020, has seen its valuation grow a little over 11% over the year and a half since and it also pays a 1.5% dividend yield at the current unit price.

Demand for social housing isn’t impacted by economic cycles. If anything, it is likely to increase when demand for retail and office properties decline. And, according to the National Housing Association, there was a shortfall of around 29,000 supported housing units in 2020. That deficit is expected to widen to 47,000 by 2025.

It’s unlikely that social housing REITs will have empty properties any time soon. Rents are usually paid by the council directly or from social security payments. A baseline 5% return for social housing REIT investments is about as secure as it comes outside of investment-grade fixed-income investments like government bonds. And investment-grade government bonds currently offer yields currently offer from around 0.75% to 1.5% for 10-year terms.

The extra risk involved in a social housing REIT investment compared to government bonds looks very good value in exchange for a yield that is 3.5%-5% better. Especially for investors whose main priority is not yet capital preservation.

And social housing is an investment that can be said to make a positive social impact by helping fund a sector that needs to grow if it is to meet the need it addresses.

World equities on track for fourth straight month of gains

The private equity sector and cash-rich firms that comprise it split opinion. Some view... END_OF_DOCUMENT_TOKEN_TO_BE_REPLACED

At the end of August, The Times newspaper reported on two real estate funds,... END_OF_DOCUMENT_TOKEN_TO_BE_REPLACED

The Covid-19 pandemic has famously seen many sectors of the economy fall into two... END_OF_DOCUMENT_TOKEN_TO_BE_REPLACED

Britain, like most of the world, has traditionally been a country of milk and... END_OF_DOCUMENT_TOKEN_TO_BE_REPLACED