In 2019, market statistics company Statista estimated that the global video games market would be worth around $160 billion in 2020. That was an already impressive figure resulting from impressive year-on-year growth of between 5% and 15% between 2012 and 2020. 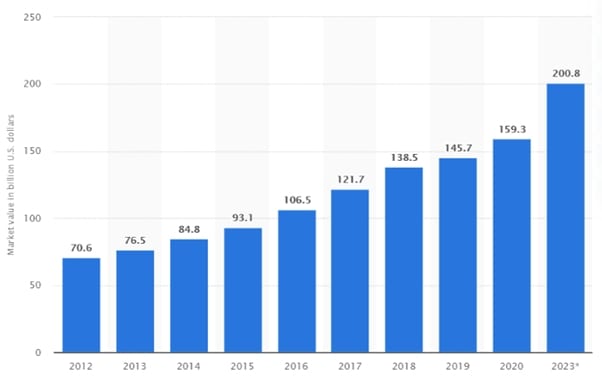 Then the Covid-19 pandemic struck. With millions stuck at home around the world for extended periods, it is no surprise that the gaming industry has proven to be one of the ‘lockdown winners’.

Market intelligence company IDC now says the industry’s actual 2020 revenues came in at $191 billion with almost 3 years of previously forecast growth fast-forwarded. To put that near $200 billion in global revenues in context, the global music industry was worth a comparatively measly $21.6 billion in 2020. Even the home/mobile entertainment industry, which includes streaming services like Netflix, was only worth $68.8 billion.

Investors with exposure to the video games industry have had a good year with the share prices of companies in the sector up significantly. Tokyo-listed Nintendo has seen its value double between March 2020 and now. Video games publisher ElectronicArts is up 65% over the same period. 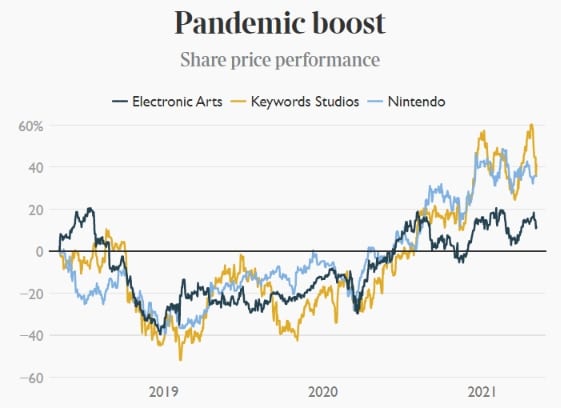 After breakneck industry growth in 2020 and early 2021 has the moment for investing in video games been and gone?

Investors who don’t yet have exposure to the video games industry, either directly through companies like Nintendo and EA which derive all their revenues from the sector or others like Microsoft and Sony who count video gaming revenues as one of several business units, the assumption might be it’s now too late. If anything, might ‘pandemic winners’ not now be in store for a stock market correction as growth rates inevitably fall back?

Video streaming service Netflix, for example, has repeatedly warned investors that pandemic conditions front-loaded new subscribers which will inevitably result in periods of weaker growth to follow. Instead of the pool of potential new Netflix subscribers being spread out over a couple of years, many brought their decision forward.

While that’s generally good because it means additional months of higher subscriber numbers boosting overall revenues, it could lead to a share price correction. Markets have a tendency to over-reward higher than forecast growth rates and then overreact when growth rates slow. Even if that’s exactly what they’ve been told to expect.

The Netflix share price over the past year has seen a level of volatility that reflects how markets have reacted to quarters that have seen a flood of new subscribers due to lockdown restrictions then a slowdown due to the pattern of front-loading. 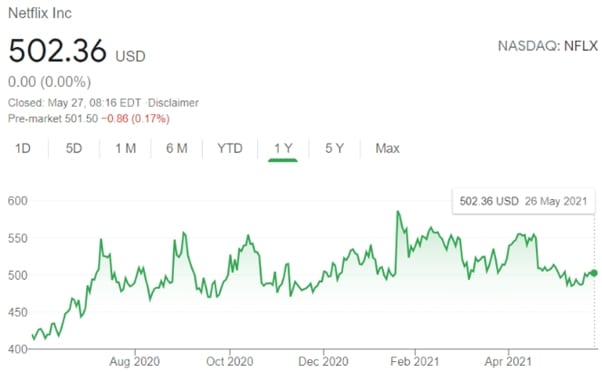 With lockdown restrictions gradually falling away in many parts of the world and growing optimism the end of the pandemic is now in sight, will the video games sector suffer a similar slide in valuations?

While there might be some short term impact if revenue growth does dip, which it may well, the smart money would be on that proving a temporary blip. And one less likely to be felt to the same extent as in other ‘pandemic winner’ industries.

The gaming industry is different to the video streaming sector in a number of ways. Firstly, margins are much better. Netflix expects an operating margin of around 20% in 2021. Nintendo’s current operating margin is around 30% but held consistently at over 80% between 2012 and 2016.

Video games maker Activision Blizzard has an operating margin of over 30% and it has been as high as over 60%. The profits on a hit game are hugely attractive and the big publishers all consistently produce blockbusters.

It’s also not as a release-intense industry. Games publishers do have to release big selling games with a degree of regularity but it’s not the same as having to produce a new big-budget TV show or film every other week. Especially challenging with social distancing rules in place as Netflix, their streaming peers and film studios have recently found out to their cost.

Xbox and Playstation are further ahead of Nintendo, which is only now embracing the model. Having combined its handheld and traditional consoles in the new Switch format, and new hardware releases over the next several years expected to be iterations on the Switch, Nintendo is moving away from the insecurities of hardware cycles to a business model that more resembles Apple’s App Store and Google’s Play.

Stephen Yiu, fund manager of the £695 million Blue Whale growth fund, counts Nintendo as one of his top 10 holdings. The fund also holds Microsoft. While a less direct play on the video games industry than Nintendo, Microsoft’s other units are also doing well and gaming contributes around 9% of the company’s total revenues.

Microsoft is also committed to growing its exposure to the video games industry and recently acquired Fallout and The Elder Scrolls developer ZeniMax Media for $7.5 billion.

Sony, which generates 27% of its profits from its video games business offers a halfway house between full exposure to the gaming sector like Nintendo and more diluted exposure like Microsoft. And Sony is winning the console wars with the PlayStation4 estimated to have sold over twice as many machines as Microsoft has of its latest Xbox.

Another interesting stock in the video games space is Paris-listed games publisher Ubisoft – Europe’s biggest and behind the Assassin’s Creed series of games. It has a bigger portfolio than many of its U.S. rivals, who often rely on just a few blockbuster franchises. Ubisoft spreads its risk across multiple releases every year.

It’s also one of the few companies in the gaming industry to see its share price fall over the last year – down 12% over the past 12 months. Analysts put the dip down to market uncertainty around Ubisoft’s planned push into free-to-play games that make their money from in-game sales.

Free-to-play games can be the most lucrative of all the industry’s sub-sectors but involve more upfront investment and a greater degree of uncertainty. But if Ubisoft makes even a modest success of the new strategy its valuation could well soar.

UK games creator Team 17, behind the Worms franchise, listed in London in May 2018 and its share price has quadrupled in four years.

One development that could see the valuations of mobile games developers go through the roof is the court case between Apple and Fortnite developer Epic Games. Epic is suing Apple for uncompetitive behaviour after the iPhone maker kicked it out of the App Store for attempting to circumvent its 30% cut of everything spent in apps downloaded from it.

The case concluded early this week and while the verdict is not expected for another several weeks, the judge made several comments that hinted at potential sympathy for Epic’s position. Legal experts who previously didn’t hold a great deal of optimism over Epic’s chances now believe their odds of winning concessions from Apple are slightly better than even.

Even if the judge were to order Apple drop its cut to 25%, 20% or 15%, from its current 30%, any difference would see billions of dollars in new revenue flow directly into the coffers of the games’ makers.

Augmented and virtual reality technologies are also expected to finally break through into mainstream gaming over the next several years, which could also change the picture again in favour of new, additional growth potential.

Esports is another quickly growing sub-sector of the gaming industry. In fact, the industry’s highest growth sub-sector. Whole stadiums are now being sold out to fans who want to watch high-profile Esports tournaments live, with millions also watching online. Prize money for winners is now regularly in the millions of dollars.

The Olympics Virtual Series, licensed by the IOC, even opened earlier this month. Esports gamers will compete across five virtual sporting events including sailing, cycling and rowing and many analysts see it as a pilot event to explore the possibility of one day introducing virtual sports into the summer Olympics.

Even if that sounds far-fetched, an official IOC Esports Olympics would be far less so and has the potential to one day compete with the traditional summer and winter Olympics in the popularity stakes.

With bond yields at historical lows, they are not a particularly attractive investment for... END_OF_DOCUMENT_TOKEN_TO_BE_REPLACED

Most of the world’s investment capital is held in the stock of companies known... END_OF_DOCUMENT_TOKEN_TO_BE_REPLACED

It’s not so long ago millennials and Gen Z were being criticised for spending... END_OF_DOCUMENT_TOKEN_TO_BE_REPLACED

After a year that strongly favoured risk-on investments as stimulus cash flooded markets and... END_OF_DOCUMENT_TOKEN_TO_BE_REPLACED