Investment exposure to uranium may not be a theme that is regularly discussed and covered in the same way as the major precious and industrial metals, energy or agricultural commodities. But with nuclear power seen as key to the UK and other countries around the world achieving carbon reduction and neutrality targets over the next three decades, uranium is a commodity currently attracting significant interest. Not least from investors. 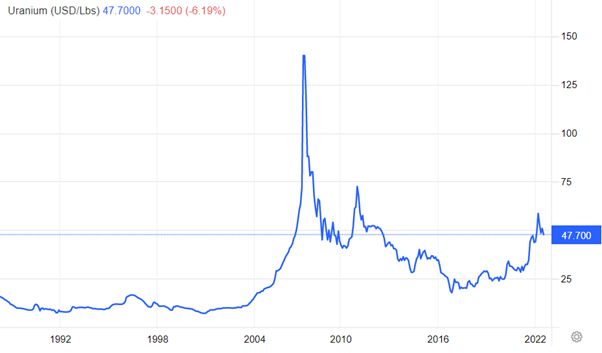 Despite uranium prices dropping from a peak of over $60lb in early March when an uprising in Kazakhstan, the world’s biggest producer accounting for around 40% of global output, caused supply concerns, they are still at levels last seen a decade ago. A pound of uranium currently fetches $47.7.

According to the World Nuclear Association, about 55 new reactors are currently under construction in countries that include China, India, Russia and the United Arab Emirates. There are also suspended construction projects in Ukraine, Japan, Brazil and elsewhere that could well be restarted and completed in future. In total, about 440 nuclear power reactors are operating in 32 countries, 100 are planned or on order and 300 more are proposed, mainly in Asian nations, where electricity demand is increasing quickly.

The USA and UK are currently the two countries that use the most nuclear energy in their power mix but are expected to be surpassed by China before the end of this decade. The Chinese government are targeting a nuclear energy contribution of 10% by the year 2030 when it also expects its carbon emissions to peak. The West is also expected to increase investment in its nuclear arsenal

Any potential investment exposure to the uranium market should be framed within the question of forecast supply to demand dynamics over the next several years and even the next couple of decades. Recent price rises have been largely fuelled by first supply chain issues and an uptick in demand. And this year on concerns around the geopolitical crisis resulting from Russia’s invasion of Ukraine early this year and the ongoing war that has resulted.

Russia’s war on Ukraine has led to heavy international sanctions against the country, a major uranium producer, and the disruption of Ukrainian production which also contributes to global supplies, though to a lesser extent.

However, the real threat would be any disruption of uranium supplies coming out of Kazakhstan, which is by far the world’s biggest supplier. The National Atomic Company Kazatomprom Joint Stock Company (Kazatomprom), 25% of whose shares are traded publically and listed on the London Stock Exchange, is the world’s largest producer and seller of natural uranium. It provided over 40% of the global primary uranium supply in 2019 from its operations in Kazakhstan 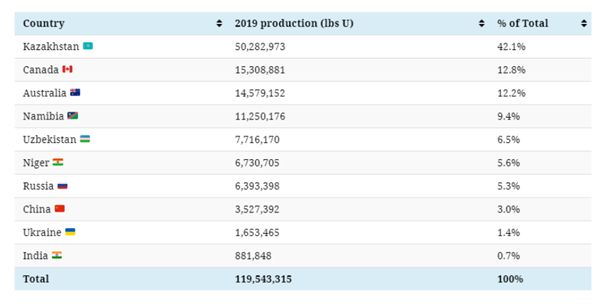 The large central Asian country is both relatively tightly tied to Russia economically and politically while still attempting to maintain friendly relations with the West. At the recent 25th St. Petersburg International Economic Forum (SPIEF), Putin’s only high-level in-person diplomatic guest was the president of Kazakhstan, Kassym-Jomart Tokayev. China’s Xi Jinping and Egypt’s Minister of Trade and Industry Niven Gamea addressed the gathering via video.

During the event, Tokayev was asked about his and the Kazakhstani people’s perception of Russia’s “operation” in Ukraine, the term Putin insists is used for Russia’s military actions in Ukraine rather than “invasion” or “war”. Tokayev replied surprisingly directly and categorically, answering that Kazakhstan does not and will not recognize quasi-state territories, which Kazakhstan sees as including the disputed Ukrainian territories of Luhansk and Donetsk. He added that “this is an honest answer to your honest question.”

Tokayev’s response was presented by Western media as a rebuke of Russia’s actions in Ukraine, or as close to one as realistically possible. Russian media were also taken aback by the statement and speculated if it represented a “breaking away” of the central Asian country. Some outlets even questioned if it represented a betrayal.

However, Tokayev otherwise showed no signs he questioned the close relationship between the two countries, stressing numerous times how important it was they work together in the framework of the Eurasian Economic Union (EAEU) to overcome the challenging economic state the region finds itself in. The very fact he attended the event in person was also a statement.

At least for now, it appears Kazakhstan will continue to successfully walk a tightrope between preserving good relations with its neighbours Russia and China and the West. Tokayev’s position on Luhansk and Donetsk is likely most influenced by the fact his country also has sizeable ethnic Russian populations in its northern regions bordering Russia.

He will have concerns that Kazahkstan recognising the breakaway of Luhansk and Donetsk could in future be used as justification for comparable developments on its own territory. But for the same reason, Kazakhstan will carefully avoid deteriorating relations with Russia.

Unless the stability of Kazakh uranium supplies is threatened, the immediate outlook looks relatively stable and there is enough of the commodity to meet current demand when secondary supplies are also taken into consideration. However, that is expected to change over the next ten years as more new nuclear power plants come online.

Data and statistics company Statista estimates combined primary and secondary supplies of uranium concentrate, based on currently operating sources, to equal around 114 million lb by 2035. Meanwhile, demand is expected to reach 209 million lb by the same year, leaving a large shortfall which could push prices up considerably.

Uranium supply and demand worldwide in 2015 and 2020, with a forecast for 2035(in million pounds of uranium concentrate) 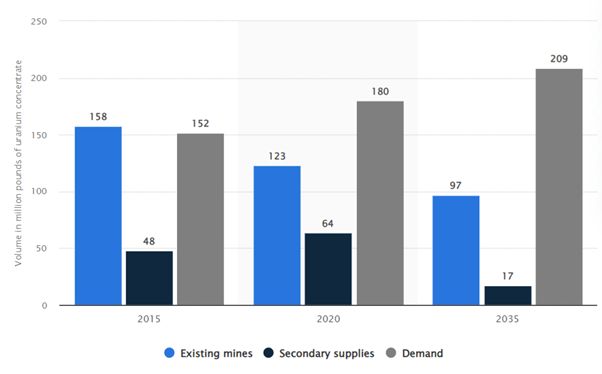 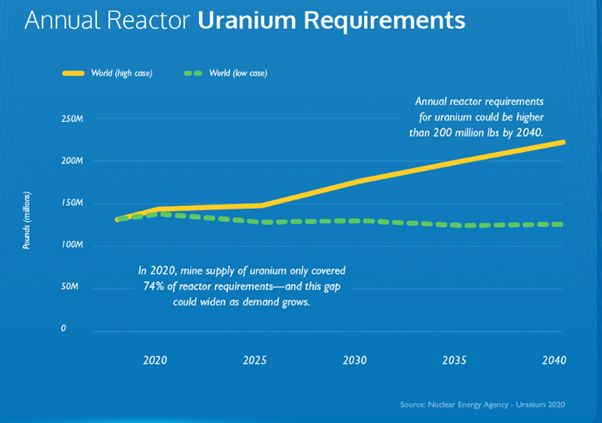 Analysts broadly expect uranium prices to rise from current levels over the next twelve months to somewhere between $65lb and $100lb. One major factor in any bull run could be, according to mining.com, aggressive buying by the Sprott Physical Uranium Trust, which increased its holdings by 10% throughout February 2022 alone.

However, other analysts have recommended caution with The Conversation warning against

“speculative interest and irrational exuberance”, adding “we could therefore see a bubble in the uranium market, and don’t be surprised if it is followed by an over-correction to the downside.”

Developing new sources of uranium will be key to balancing supply with demand over the next couple of decades and how quickly commercially viable new mines will be opened is arguably the biggest question for investors potentially interested in exposure to the commodity.

The Canadian company Standard Uranium is currently running five exploration projects in the Athabasca Basin, Saskatchewan, Canada, home of the world’s highest-grade uranium deposits. How successful it is will have a significant bearing on uranium’s future price trajectory.

Stocks with exposure to uranium

If you do decide you are interested in investment exposure to uranium, there are a number of publically listed mining companies that represent a pure play on the commodity and others which are broader mining groups with some exposure.

It is possible to buy shares in the world’s largest producer Kazatomprom over the London Stock Exchange and the company is also the largest holding of the Toronto-listed Sprott Uranium Miners ETF. For pure investment exposure to the price of uranium, the Sprott Physical Uranium Trust ETF is the most obvious option for investors.

The London-listed mining giants BHP Group and Rio Tinto are the third and fourth largest uranium miners in the world but uranium accounts for a small percentage of overall revenues for both, making them a very diluted play. Albeit one that would also offer exposure to the broader commodities bull market.

Canada’s Standard Uranium is another pure play investment opportunity for direct exposure to uranium but a relatively high-risk one whose success will be heavily tied to the success of current exploration in the Athabasca Basin.

Other public companies that offer direct exposure to uranium include:

For more diversified exposure to uranium miners and prices, investors might consider the ETFs:

Both are relatively small with assets under management of just $1.31 billion and $739 million respectively.

Investing in miners and commodities, especially smaller miners focused on a single commodity, is generally regarded as risky. Investment exposure to uranium is no different and prices of the commodity over the coming years will be heavily influenced by both the scale of new financially viable discoveries and geopolitical developments.

But demand is set to rise and there is a significant chance the uranium price will have a long-term average trading range that is higher than current levels over coming years.