It’s been a good month for the London-listed enterprise cybersecurity firm Darktrace, whose share price has gained over 13% after it upped its guidance for the 6th time in succession. It’s been a less positive 2022 to date, which has seen Darktrace’s market capitalisation decline by almost 8% despite recent gains. The 12-month picture is gloomier still, with the company’s valuation down almost 50%. The company went public through an IPO in April 2021.

Darktrace has had a turbulent early history as a public company since floating last April. It was only founded in 2013  as a collaboration between the British intelligence agencies and Invoke Capital, a company owned by Mike Lynch. Lynch is a figure of some controversy as the founder of the tech company Autonomy, which was sold to HP for $11 (£8) billion in 2011. 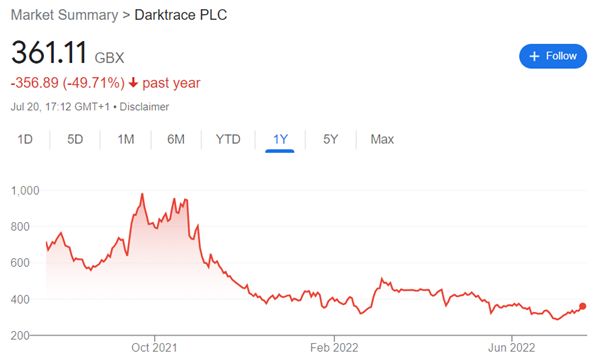 HP subsequently sued Lynch for fraud after writing down the acquisition’s value by $8.8 billion in 2012, claiming that Autonomy’s financial performance had been knowingly inflated. The UK’s then Home Secretary Pritti Patel approved Lynch’s extradition to the USA in January to face criminal fraud charges after the U.S. tech giant won a civil fraud case brought against Lynch in London.

However, despite the troubles of Lynch, whose Autonomy-derived wealth financed Darktrace’s early years, the company has emerged as one of the world’s most innovative cybersecurity companies. It uses artificial intelligence and behavioural analysis to detect the early signs of a cyberattack on a network, shut the digital door, and provides technological fixes.

After floating last year, Darktrace’s share price went on a run with investors enthused by its exciting prospects and excellent growth. By October 22 2021, it hit a closing high of 945.5p-a-share and on September 24 also reached an intraday peak of 1003p. However, between then and a recent low of 292.6p on July 1 this year, Darktrace’s value fell by over 69%.

However, while Darktrace’s valuation declined its business performance strengthened. In an April trading update, it upped expectations for 2022 revenue growth to 46%, while its customer base is also expanding at rapid levels. In its Q3 trading update, the company reported revenue growth of 50% year-over-year to almost $110m, with 359 net new customers added.

This month when reporting its Q4 profitability for the quarter to the end of June, Darktrace raised its full-year revenue guidance again to “at least” 48% or $417 million. The company is also steadily improving its profitability. Its adjusted EBITDA margin (earnings before interest, tax, depreciation and amortisation) expanded from 12.5% to 19.5% during its financial year to the end of June, also beating prior expectations. Analysts predict adjusted EBITDA to more than double to $62 million after 2021’s $29.7 million.

It was also a profitable quarter with 500 new global clients added, a 32% year-on-year improvement and raising annualised recurring revenue to at least $513 million at full-year constant currency rates. That represents a 42% improvement year on year.

Darktrace’s CEO Poppy Gustafsson is also bullish on the company’s prospects over the year to the end of June 2023, commenting:

“Against a turbulent geopolitical background, it’s no surprise that long-term cyber risk is an even higher priority for chief information and security officers and senior executives”.

She did caution that optimism “must be balanced against the uncertainties inherent in the current global economic environment”. But cybersecurity is expected to account for an increasing portion of enterprise IT budgets over the next few years and it is unlikely to be the victim of any cost cutting. Darktrace should be well placed to capitalise on that trend.

Fortune Business Insights forecasts that the cybersecurity market size will reach $376 billion by 2029, at a compound annual growth rate of 13.4%. The growing number of e-commerce platforms is cited as expected to be the single biggest contributor to that growth but cybersecurity is a concern for almost any major enterprise or public sector department or organisation with a significant digital footprint. Which these days means the vast majority.

Darktrace is also beefing up its AI capabilities and recently acquired the AI company Cyberspring for €47.5 million. The company commented it expects the deal to be “enriching” for the group and will “accelerate the company’s market entry into new areas like proactive AI cybersecurity”, which should be a competitive advantage.

Why have analysts been bearish on Darktrace despite its strong performance?

Despite its encouraging business metrics, Darktrace’s valuation plunge since late last year has been largely driven by bearish downgrades by analysts. So what’s their beef with a cybersecurity company doing well in a growing market?

The most bearish analyst downgrade came at the end of October 2021, when the London-based investment bank Peel Hunt, an investment bank based in London, placed a ‘sell’ rating on the stock and a price target implying a downside of 50%. The bank’s analysts wrote off much of Darktrace’s offering as a “gimmick” and highlighted intensifying competition.

Major cloud providers including Amazon Web Services (AWS) and Google Cloud Platform have both launched cybersecurity products that can be seen as lower-cost alternatives to Darktrace that provide a lot of the same value.

Between that damning analysis and the beginning of this month, Darktrace’s valuation dropped from around £6 billion to a little over £2.2 billion. A chunk of that can be put down to broader market conditions which have punished equities generally and particularly growth technology stocks.

In May, JP Morgan analysts also published a bearish report on the company that gave it an “underweight” rating, also pointing to competition and the fact that customer acquisition and retention costs are rising.

However, not all analysts are bearish on Darktrace. At the end of June, Berenberg also decreased its price target for the group from 1,000p but to 600p, which would represent 66% upside over the next 12 months. Previously, Berenberg has stated that the plunge in the Darktrace share price has been driven by “fear not fact”. Berenberg likes Darktrace’s scaleability potential and strong unit economics.

Berenberg is also impressed by Darktrace’s life-time value (LTV) to customer acquisition cost (CAC) ratio. It’s a formula popular in the insurance industry the investment bank believes also fits enterprise cybersecurity companies. It measures how often a customer buys and how much effort goes into sustaining that repeat business. Or, in other words, ROI on customer acquisition. The bank’s analysts comment:

“Healthy companies yield a ratio of 3 [contract] times, whereas Darktrace has historically achieved a ratio close to 6 times. This is driven by particularly strong client retention and, in our view, is evidence (at least in part) of its superior technology offering.”

“While we reduce our price target to 600p to reflect a significant pullback in market multiples, we remain conviction buyers.”

Overall, Darktrace splits analysts in a way few stocks do. That could be at least partly because analysts struggle to understand the technical strengths and weaknesses of cybersecurity products and services and find it difficult to judge their value proposition.

The company’s strong growth in recent months is certainly positive and that’s been partly reflected in the slight improvement in its share price during July. If that can continue for a sustained period is hard to say yet and will be partly influenced by wider market trends. However, another positive quarter reported in October could catalyse a more significant recovery in valuation.

Right now we’re still firmly in a bear market and broker target share price estimates are unusually inconsistent when it comes to Darktrace. But it is one to watch.