Home Latest News The Energy Industry’s Changing: What Does That Mean For Big Oil and Utilities Stocks?
Latest News

The Energy Industry’s Changing: What Does That Mean For Big Oil and Utilities Stocks?

The energy industry has evolved over the last decade or so. The traditional big oil and gas companies like Shell and BP have diversified into renewable energy and streamlined to a structure with the resilience to absorb oil price swings between $45 and $100 a barrel. But most industry insiders and analysts expect it to change much more over the next couple of decades.

The Price Of a Barrel of Crude Oil 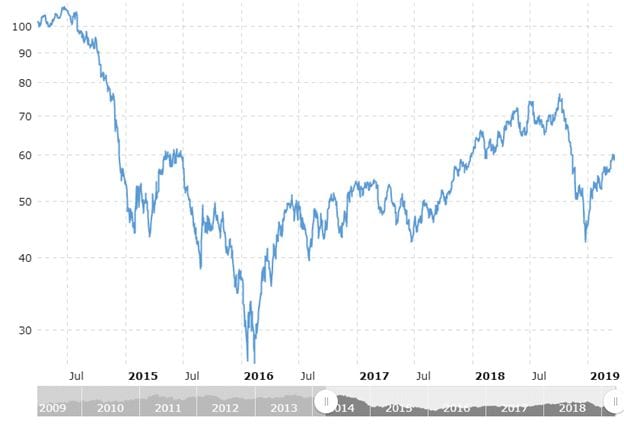 In this article we explore how and what that might mean for companies across the energy sector and their investors.

How Do You Value A Company That Might Migrate Between Sectors?

When investors are valuing stocks, it’s done on a number of different levels. First an investor will look at the company’s fundamentals – revenues, margins, profits, debt and other liabilities, growth in different categories and so on. They also look at the ratios between various fundamentals like EV/EBITDA ratio, price-earnings ratio (P/E) and the price-to-cash-flow ratio (P/CF).

But investors don’t always look at the same figures or judge companies by the same rules. If a company that is young and growing quickly an investor might not even be concerned it’s making a loss, or a very small profit. If it’s really creating a new market and the investor has faith in that market they might not even worry too much about revenues. The same numbers are interpreted by investors in very different ways from sector to sector and even company to company. And different investors will have diverging opinions on which fundamentals and ratios define the fair value of the same company.

It’s not black and white but that’s how markets work and why any given investment decision can return a strong, middling or marginal profit. Or a heavy, middling or marginal loss. But despite that ambiguity there are some norms, or a selection of slightly differing norms, that most investors examine when analysis particular companies. These are most commonly based most on the stage of maturity a company has reached and the sector it is in.

Companies themselves also of course get used to the business model that works in a particular sector and for a particular business activity. Which is why, while diversification and evolution is necessary if a company is not to become obsolete, it must be done with care. It carries unknown quantities and it’s not unusual for companies to make very expensive mistakes investing in trying to develop a new product or sector.

In the energy sector, BP lost a lot of money by jumping aggressively into the solar panel manufacturing sector in the early 2000s. Chinese ‘dumping’ of cheap, state-subsidised panels ripped the bottom out of the market and BP exited to heavy losses in 2011. BP was big enough to absorb that hit but it did sting and the company has been much more careful since with its diversification strategy for renewables.

But over the next few decades, the big oil and gas companies will be moving across sectors. New technology and climate change worries mean that a gradual shift towards electric power generated by renewables has now, it is widely recognised hit tipping point and will continue.

Despite the growing fuel needs of huge developing economies around the world like India, south east Asia and Africa that keeps overall global demand for oil and gas rising for now – peak demand is on the horizon. Shell recently admitted for the first time that it predicts that peak will be reached by the 2030s. From that point on demand for fossil fuels will start to fall as renewables-generated electricity takes over.

Big oil and gas recognises that and is now preparing itself to evolve. Shell, BP, Total, Exxon Mobil, Eni and other huge oil companies are preparing for a transition into renewables-based electricity production. But they are also looking at selling it as utility providers as the way to maintain their current size and status.

That’s a huge change. Despite all of the noise they generate around their renewables units, they are still a very small portion of their overall businesses. Shell invests comfortably less than 10% of its annual $25 billion budget in its new energies unit. BP much less. $500 million out of $15 billion. But that will change. It has to. The bigger challenge, however, will be developing utilities businesses as part of a vertical expansion into the electricity market.

Utilities is a very different market to oil and gas extraction and fuel sales. The latter can and is expected to provide margins of around 20%. The former single digits. And it’s a hugely different business model that involves dealing with millions of customers and serving their homes. It’s not the self-service model of the petrol pump and doesn’t, as the utilities sector works now, offer the same kind of returns.

For the companies themselves, and investors, it’s a new world. Trading barrels of oil and selling fuel is completely different to selling kilowatt hours. Can big oil and gas successfully transition into vertical electrical utilities companies? As electricity becomes the main source of global power it’s also a big opportunity. Neither generating electricity for renewables nor selling it into homes and businesses generates the margins big oil has built its business model on.

Whether they can successfully transition is a big question for investors. Institutional investors managing insurance and pension funds as well as private investors owning shares individually rely heavily on Shell and BP, especially in the UK. Shell paid out dividends of £11.72 last year – a yield of 6.2%. BP £6.37 – a yield of 6%.

Sooner or later these investors will have to make a call on whether the same two companies will be as an attractive an investment over the next two to three decades.

It is reported that Shell believes it can realise returns of 8% to 12% as a clean energy electrical utility. That is significantly less than it does as an oil company but significantly more than incumbent electrical utilities manage. So why does Shell think it can do better than companies with decades of experience in a market in which it has almost none?

Shell’s New Energy director Maarten Wetselaar recently told Bloomberg it is the electrical utilities market of the future and not the past that interests it and it thinks it can be successful in:

“With a much more complex system, we believe that by optimising and trading around this we can make better returns than the industry has done so far. Our sense is that returns will be higher on the customer end.”

Decentralisation of electricity production, and the coming of electric vehicles, will also change the sector today’s big utilities companies work in. It won’t be today’s simpler sale of kilowatt hours.

Shell is confident it can use electric car charging facilities and smart, energy saving technology to attract and hold customers for its future utilities business. For investors, the problem is whether or not it, and the other big oil companies that will be forced into a comparable evolution are right to be confident of success.

One big question is whether consumers will be ready to buy ‘clean energy’ from companies with the current reputation of the big oil brands. The Times newspaper recently quoted ‘an observer’ as reflecting:

“Would you rather buy energy you hope is clean from Shell or from a new company with a wind turbine on their logo?”

“You have to think there would be a degree of scepticism about buying clean energy from one of the largest fuel producers on the planet.”

Rebranding will be one major challenge Shell, BP and their peers face. In the end, such a big shift in the business of big oil will inevitably mean some succeed and others fail. Investors will have to try and find a way of shifting how they analyse and value these investments as their evolution unfolds so they stand the best chance possible of being left with holders in the winners.

“There will be winners and losers in the battle for the home that is now under way. Some well-known names are bound to disappear from the UK market over the next few years.”

But the change won’t happen overnight. There is still plenty of money to be made in oil and will be for a couple of decades yet. Gas’s role is likely to increase and then remain stable for many decades more. Which is why oil companies have been making attention-grabbing acquisitions of LNG companies. For investors the challenge will be getting out of the right companies at the right time. And perhaps getting into others or increasing holdings at the right time. Investing in energy suddenly got a lot more complicated.

The Nasdaq dropped 1.9%, while the yield on 10-year Treasury notes dropped to 1.557%... END_OF_DOCUMENT_TOKEN_TO_BE_REPLACED

The dollar’s received a further boost as the Nasdaq dropped more than 2%, the... END_OF_DOCUMENT_TOKEN_TO_BE_REPLACED