After slumping by over 30% last week on an ill-judged investor presentation designed to soothe nerves The Hut Group (THG) share price has recovered 11% in early trading this morning. The partial bounce back comes after the company’s founder, Matt Moulding, announced his decision to give up the “golden share” that gives him a majority on any group decision requiring a shareholder vote.

Moulding holding a golden share was flagged as a corporate governance risk during THG’s IPO process last autumn but enough investors chose to ignore the risk of ultimate decision making power being concentrated in the chief executive’s hands. However, concerns have recently returned and Moulding has taken the strategic decision to head off investor unrest by voluntarily giving up the super-enhanced voting rights assigned to his own shares by the dual-class structure. 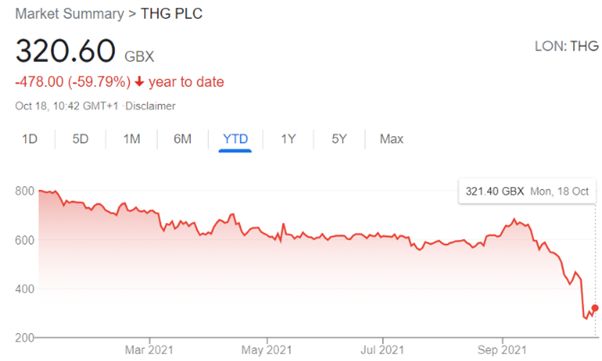 While Moulding’s golden share meant he could veto any takeover bid for the 3 years after THG went public, despite still owning just 22% of the stock, it also meant the company could not apply for the premium London Stock Exchange listing that would have seen it enter the FTSE 100 index. This morning the company announced it will now pursue the premium listing that should see it become part of the benchmark index, automatically boosting demand for its shares from passive index-tracking funds.

The Hut Group’s valuation had fallen to £3.5 billion by the end of last week from the £5.4 billion achieved when it listed last September, despite a strong start to life as a public company.

Joining the FTSE 100 will give THG’s valuation an immediate shot in the arm but the debate on whether companies with dual-class share structures should be permitted to do so will continue. They currently aren’t but a recent Treasury-commissioned review led by Lord Hill of Oareford recommended changing the rules for premium listings to allow for dual-class share structures. They are popular with fast-growth tech companies which the London Stock Exchange is keen to attract more of.

However, even if the consultation the FCA is currently conducting on the question concludes with the decision to allow companies with dual-class share structures premium listings, it will no longer affect THG and Mr Moulding. The THG board is also said to be looking at the possibility of adding an independent chairman and independent non-executive director to further boost corporate governance.