Up 3.8% in morning trading today, The Hut Group (THG) share price looks set to record a fifth consecutive day of gains. The ecommerce company’s valuation is now up by over 31% for the past five days. The Manchester-based company only listed in September last year but investors have this week been encouraged by a combination of THG avoiding an anticipated pre-Christmas profit warning and rumours the company may be taken private again.

Bloomberg this week reported that THG founder Matt Moulding and the company’s board have been discussing quitting its public listing and returning to private ownership. Moulding has recently criticised the London market’s lack of understanding of technology and especially e-commerce business models as behind its valuation travails this year. Despite the recent 30% increase in The Hut Group’s valuation, it is still down 72% for the year-to-date. 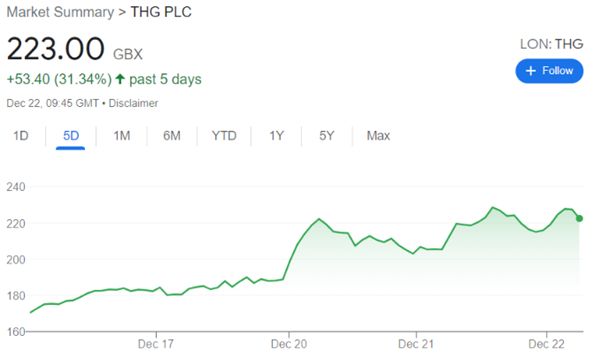 Last month Moulding went as far as to say he feels he made a mistake listing his company in London rather than on one of the major Wall Street exchanges. Now it seems he is reconsidering the appeal of public markets more generally. The Bloomberg report suggested that the company could take the decision to return to private ownership in the new year if its market capitalisation remains depressed.

However, a THG spokesperson described the assertion such discussions have taken place, or that Moulding is leaning towards a return to private ownership, as “pure speculation”.

Moulding himself has been far less categorical. In an interview with GQ magazine last month he told the reporter that the fact he and a small number of other shareholders still own a majority of THG stock meant that buying the rest back from public markets investors was an option. He would, he told GQ “…just…[keep an] open mind”.

From a January high of 799.5p, The Hut Group share price fell to a low of just 167.25p last week before the 31% gains recorded over the past five days. Investors have been chattering about impending corporate action at THG designed to boost its share price, with options including spinning out its nutrition unit as an independent public company or selling off beauty assets like the Look Fantastic or Bult Beauty brands. However, the company itself has denied considering either of those potential options.

The influential research firm The Analyst also recently withdrew its “short” recommendation for THG and also halted coverage of the stock because it had dropped so much this year. However, some investors have taken that as a sign the company’s valuation has now bottomed out and will now start to rise again.

THG will report its fourth-quarter results on January 18th and they may well go a long way to deciding the company’s future in public markets. While a number of ecommerce companies have recently issued profit warnings, blaming supply chain disruption, THG has remained silent.

That’s been taken as a sign it is probably on track to hit its forward guidance for sales and profits. As has staff members posting on the professional networking site LinkedIn that THG’s Beauty division had

“smashed this year’s targets [for Single’s Day] before the day had even begun”.