Home Stock & Shares The Japanese Stock Market Hasn’t Hit A Peak In 30 Years And Japanese Investors Are Pessimistic. But Should You Buy?
Stock & Shares

The Japanese Stock Market Hasn’t Hit A Peak In 30 Years And Japanese Investors Are Pessimistic. But Should You Buy?

While the FTSE 100 here in the UK and Wall Street’s benchmark indices of the S&P 500, Nasdaq and Dow Jones have seen ‘new record high’ headlines with now monotonous regularity over the past few years, the same cannot be said of Japan’s Nikkei 225. Developed stock markets elsewhere in the world have never been higher than the levels the international equities bull market now into its 11th year has taken them.

In contrast, Japan’s Nikkei stock market index reached its own all-time high of 38,957 a whole 30 years ago now. 3 whole decades. The same year the Nikkei 225 reached its historical peak, Nelson Mandela was released from prison, the Hubble space telescope was placed into orbit by the Discovery shuttle and wrecking cranes began tearing down the Berlin Wall at the Brandenburg Gate. Oh, and Sinead O’Connor achieved number one in the UK’s music charts with ‘Nothing Compares 2 U’.

The internet has done more than anything else to shape the modern financial markets by allowing for almost real time access to global information and investors being able to execute almost instant buy and sell orders. But the World Wide Web wasn’t even publically available until 1991. In short, Japan’s stock market peaked before what can be considered as the modern era of the world economy was even underway. It was another age.

After that peak 30 years ago, Tokyo’s stock market crashed by almost 50% over the next year. Right now, it still sits at less than 23,827 and has never threatened to regain those heights of 1990. 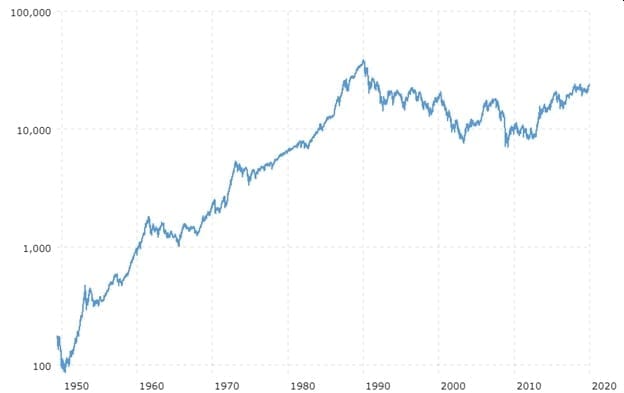 Japan is still a wealthy country and enjoys one of the highest living standards in the world. But the struggles of its economy with deflation over decades is well known. An ageing population, almost a third of Japanese are over the age of 65, has dampened consumer spending and decreased the labour market. Current prime minister Shinzo Abe’s economic policy of aggressive stimulus has only worked to a limited extent and an October increase in VAT hasn’t encourage spending.

According to Stephen Harker, the Man GLG Japan Core Alpha fund’s manager, Japanese investors aren’t feeling particularly optimistic. They have been selling shares, pushing down prices. Could that represent a buying opportunity for investors now? Or is Japan’s stock market destined to remain in the doldrums for the foreseeable future?

There are positives for Japan’s growth prospects. While the population might be ageing, the country’s government has been actively encouraging greater participation in the work force by older individuals and women. Japan has one of the lowest female participation rates in the workforce in the developed world, at just 51% according to World Bank data. The result of the participation drive is that the number of Japanese in employment has actually increased in recent years despite the country’s ageing demographic.

And Japan’s public companies are in good health, even if there is a lack of the kind of stellar growth rates than can be seen among the tech companies of Wall Street and, increasingly, China. However, generally, their balance sheets are strong, earnings growth prospects solid and valuations cheap when compared to sector peers on other developed markets.

“Japan has areas where it is truly world class, for example precision engineering, high-volume production of things like motor vehicles and certain areas of technology and consumer electronics.”

His fund holds stocks that include Nippon Steel, which is extremely profitable and cheap on almost any normal ratio or metric, Honda, whose share price also looks to represent good value and Mitsubishi UFJ. The latter should not be confused with the automaker and is a bank – but one that earns more than 50% of its revenues internationally and is a major shareholder in the US banks Morgan Stanley and Union Bancorp.

Japanese equities are certainly not fashionable but there is a strong case that means there are some very undervalued gems to be picked up. It’s certainly a market worth a look for investors looking for value and ready to put in some time to do the research.

Will Elon Musk & Tesla Have The Last Laugh By Wiping Out Their Shorters?

Contracts on the Dow were down more than 100 points, following third consecutive day... END_OF_DOCUMENT_TOKEN_TO_BE_REPLACED

S&P500, Dow Jones and Nasdaq futures all fell between 0.5% and 0.6% Global shares... END_OF_DOCUMENT_TOKEN_TO_BE_REPLACED