About 10 years ago the boiler rooms of cold callers pushing the kind of dubious unregulated investment schemes that end up in the newspapers were heavily promoting the latest trend – rare earth metals. The thing about these investment schemes that inevitably see everyone, except the unscrupulous brokers on huge commissions peddling them, lose their money, is that their success (for those selling them) relies on a grain of truth.

Invest in a parking space – there’s a shortage of urban parking. Invest in carbon credits – there will soon be a major international market for the trading of industry emissions quotas. Invest in rare earth metals – demand is soaring and supply limited.

As macro assessments of the market for these unregulated investment products, they were broadly accurate. Which is why smooth, sometimes high pressure, sales patter convinces so many small investors to hand over a chunk, sometimes all, of their savings.

The problem is very few passive investments can finance huge commissions paid to sales agents and deliver huge returns. Especially when fees also have to be paid to a car park management company and prime location car parks are traded between private equity companies and REITs, not sold as individual ‘buy-to-let’ units to investors for £20,000 each.

Without actually knowing details, I’m quietly confident no small investors made money buying into these rare earth metals schemes either. How and to whom did they subsequently sell their kilogram of assorted rare earth metals at a profit?

But the sales pitch for these dubiously packaged, ‘scammy’ rare earth metals investment schemes again played on a truth. We are indeed facing a serious international crisis in supplies of the rare earth metals so many of the components used in modern technology rely on.

And it’s a trend mainstream investors in regulated products like company shares and funds should be aware of. The problems around rare earth metals supplies could both negatively impact companies they are exposed to and offer interesting investment opportunities.

While the scale of natural deposits varies, most commonly used rare earth metals are not quite as rare as the name suggests. But supplies are heavily concentrated in China, which accounts for 60% of the world’s rare earth metals – around 140,000 tonnes according to estimates by the US Geological Survey.

That compares to just 38,000 tonnes from the second largest producer – the USA. China has an even tighter stranglehold on the processing operations that turn rare earth minerals into metals and magnets. Research firm Adamas Intelligence says that 90% of all rare earths processing is done in China.

The UK, USA and every other international military power even rely on rare earth magnets that are in the majority sourced from China for their missile systems and other military equipment.

China’s role as the main exporter of the 17 rare earth metals, which are actually minerals, the magnets used in electrical devices from electric cars, smartphones, wind turbines and medical devices are made from, represents a security risk. Its stranglehold on processing facilities even more so.

In 2019, Chinese president Xi Jinping pointedly visited a rare earths processing plant in Jiangxi the week after the USA had blacklisted the country’s telecoms giant Huawei from any role in the country’s 5G infrastructure. He used the opportunity to, in what was internationally interpreted as a veiled threat, highlight the reliance of global supply chains on rare earth metals.

The risk of China turning off the taps of rare earth metals supply in the event of a geopolitical crisis is not the only danger to international supply lines. A less dramatic but more significant threat is China’s new drive to decarbonise its domestic economy. That will involve a huge investment in electric vehicles and renewable energy generation such as colossal solar and wind power plants.

Electric vehicles, wind turbines and solar panels all contain significant amounts of a rare earth metals. Chinese exports may drop off significantly simply because it needs most of its supply for its domestic market.

The race is on to reduce rare earths reliance on China

A recent report published by the International Energy Agency (IEA) raised the risk of over-dependence on China for supplies of rare earths, warning it was

It recommended stockpiling of rare earths by western nations as a buffer against China creating global shortages if it significantly reduces exports. Western nations have already been taking steps to move towards reduced reliance on Chinese supplies of rare earth metals and magnets made of them.

The UK’s government has recently launched an investigation into UK supply chain vulnerabilities under the title Project Defend. Its mission is to find ways to reduce reliance on China for crucial goods and materials such as PPE and rare earth metals.

Birmingham University spin-out Hypromag is helping in that regard. The company is working on a scalable process for recycling rare earth magnets from old computer hard disks. The hydrogen technique being used was developed by Rex Harris, emeritus professor at Birmingham University and a founding director of Hypromag.

Allan Walton, another Hypromag director, comments on the importance of the company’s work with:

“We’re building a supply chain that you could feed primary or secondary material into. For magnets, it’s far quicker to get a supply chain running for recycled material than it is from a new mine.”

The UK also last month saw work begin on a new rare earth metals processing facility, one of the first outside of China. The plant’s site is the Saltend Chemicals Park in Hull and it is expected to take 18 months to build, with production expected to start in 2023. Planning permission was secured last month by Pensana, the London-listed company behind the project. Pensana is still in the process of raising the £100 million of initial funding it needs to get its rare earths mine in Angola operational and build the Hull processing facility.

The USA and EU are similarly concerned and moving to address risks to their rare earths supply chains. European Commission President Ursula von der Leyen recently said the fact the EU sources 98% of its rare earth supplies from China was “not sustainable”.

Last year the EC’s Action Plan on Critical Raw Materials drew attention to vulnerabilities in the supply chains of rare earths and also lithium, a key component in batteries. It also estimated EU demand for rare earth metals will increase 50-fold by 2050. In the USA President Biden has also prioritised reducing the USA’s reliance on imports of rare earths magnets.

What are the options for investors interested in exposure to rare earths but would understandably prefer to avoid illiquid and questionable direct investments in the physical commodities?

As already mentioned Pensana, the company developing a rare earths mine in Angola and building a new processing plant in Hull is listed on the London Stock Exchange. At this stage of the company’s development, it would be an investment with a relatively high-risk profile. But if it raises the funds it needs and brings the mine online and work starts at the processing facility, the returns could be attractive. 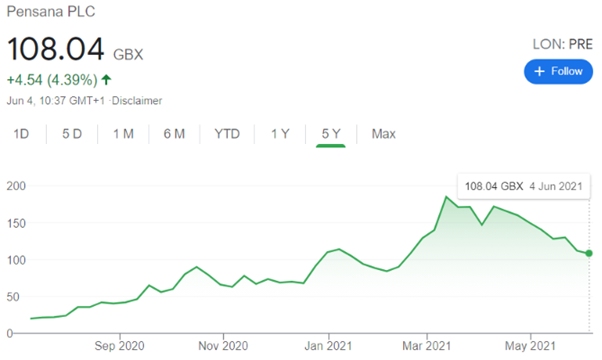 Another London-listed option, this time the company is listed on the AIM sub-market, is Canadian rare earths explorer Mkango Resources. Hong Kong commodities trader Noble Group is an investor and Mkango also owns a stake in Hypromag. It is also planning to build a UK rare earths processing facility, this time in Birmingham. The facility would both process imported rare earths and recycle magnets recovered from old devices.

It’s not a rare earth, but lithium is also a key raw material for electrical devices and its supply chain suffers from similar shortages. Cornish Lithium hopes to build a lithium mine in Cornwall and has so far raised £6.6 million through crowdfunding and plans to do so again. Another high-risk investment but one that could bear fruit if the company succeeds in getting a UK-based lithium mine into active production.