The sheriff of AIM strikes again

After last night’s documentary on the BBC Inside Out London which you can watch here , Investors are left with one question. Has David Lenigas & Steve Sanderson ramp up shares in UK Oil & Gas (UKOG) with unjustifiable claims about Horse Hill ?

If we go back to April Shares in exploration company UK Oil and Gas (UKOG) exploded after the discovery of up to 100bn barrels in its oil field in Sussex. The question everyone is asking  is where did the press get the 100bn barrels figure from? Rising 164 per cent on the 9th April 2015. Why did neither David Lenigas or Steve Sanderson go out of their way to correct the media about the extortionate number being quoted all over the news?

UKOG claim they have no idea where this number came from but Inside out London clearly shows Steve Sanderson clearly stating 100bn Barrels. So what has happened ? clearly the claims have been exaggerated.

This is where the Sherriff of Aim Tom Winnifrith comes in. As anyone who follows Tom on Shareprophets would know , Tom is notorious for investigating companies who are not being truthful the their shareholders or Investors . Currently receiving on average four lawyers letters a week and a death threat every couple of months he considers himself the sheriff of Aim and the man on the investor’s side. 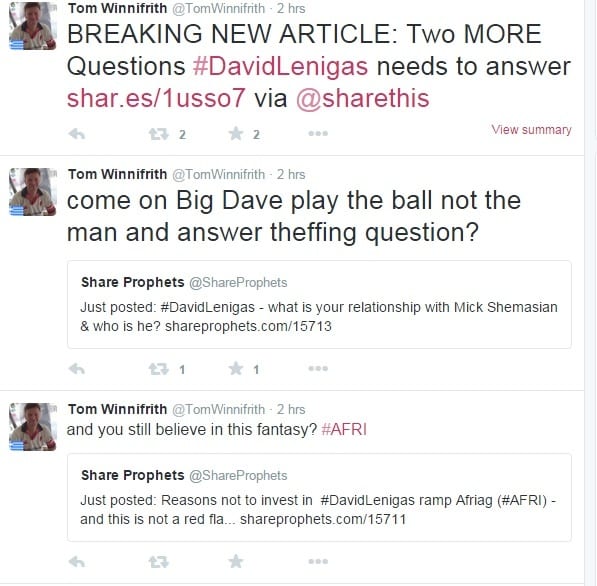 Investors are left with one question – What returns are we actually likely to expect from our shares in UKOG ?

We ask the one and only Sheriff of Aim his thoughts

‘You will make a lot less than David Lenigas will. He is now a proven ramper. I ask simple questions of him but instead of answering he posts silly tweets attacking me. I answer this from Bristol where I live 10 months of the year as he knows well. The man is talking cock and anyone owning shares in UK Oil & Gas can look forward to a life of poverty.’ Tom Winnifrith

Natural gas prices have rocketed with Russia accused of managing supply to drive up... END_OF_DOCUMENT_TOKEN_TO_BE_REPLACED

After their valuations boomed in 2020, the UK’s online fast-fashion giants of Asos and... END_OF_DOCUMENT_TOKEN_TO_BE_REPLACED

The dust has almost settled on the months-long takeover battle between U.S.-based private equity... END_OF_DOCUMENT_TOKEN_TO_BE_REPLACED