The ‘Song Fund’ Outperforming The FTSE 250

Most funds invest in the shares of companies. Or bonds, commodities and other tradeable assets. But one, the Hypgnosis Songs Fund, invests in an alternative asset – songs. And it’s doing very well from it, outperforming its benchmark FTSE 250 index this year. While the midcap index is down 26.6% so far for 2020, the Hypgnosis Song Fund has slid by less than 3%, buoyed by an increase in streaming royalties since the beginning of the Covid-19 lockdown. 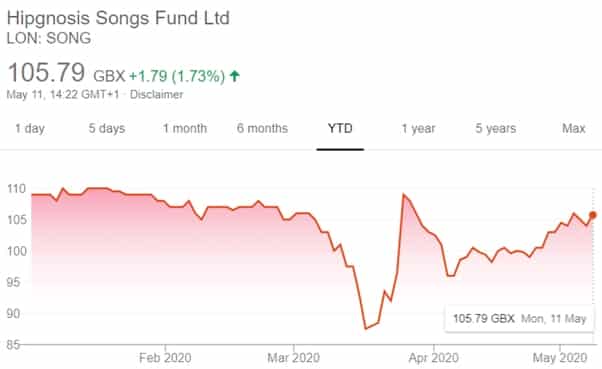 The Song Fund is actually slightly up on where it was when markets crashed in early March, with investors panicking as the pandemic took hold. But since then Spotify data shows two in five of us have been streaming more music to pass the additional time we are spending at home.

That’s giving a return on the $1 billion of music rights the fund has invested in since 2018, building up a catalogue of 12,000 songs including classics such as Bon Jovi’s Living On A Prayer, Journey’s Don’t Stop Believin’ and more recent hits by groups including The Chainsmokers.

The Hipgnosis Songs Fund is run by Merck Mercuriadis, the Canadian who made his name in the music business as manager for artists including Elton John, Iron Maiden, Beyonce and Nile Rodgers. Its recent performance is justifying his belief that songs would prove to be great financial assets generating “predictable and reliable” cashflow. Even more importantly, royalties cashflows are not correlated to wider financial markets.

The Songs Fund is Mr Mercuriadis’s second stint in the City. He was previously in charge of the listed record label and management group Sanctuary. The company did well but ended up being acquired by Universal for a bargain price in 2007 after it discovered “fundamental errors”, in its accounts.

Having been “naïve in our dealings with the financial community” and not getting the “sophisticated advice that we should have”, Mr Mercuriadis says he has learned his lesson. This time he has gone “top heavy” on financial advice since founding Hipgnosis in 2018.

The fund’s underlying business case is that streaming services such as Spotify and Apple Music mean music has evolved from a luxury into a utility. That trend also allowed the fund to buy “great songs available at attractive prices”, as a result of the falling value of songwriters’ royalty cheques reducing the value of their own copyright catalogues.

A closed-ended fund, Hipgnosis went public in July 2018, raising around £650 million from investors who receive regular dividends paid out from the steady flow of royalties into the fund. The fund may be investing in an asset class few might have considered as a solid financial markets performer. But Mr Mercuriadis is quickly proving that music can be just that.