Tesla boss Elon Musk revealed on Twitter yesterday how he was snubbed by Apple chief executive Tim Cook several years ago when he approached him with an offer to sell the electric car company to the iPhone maker. At the time Tesla was struggling and a long way from the breakthrough year 2020 has proven to be. Mr Cook, however, was not interested. He, said Musk, “refused the meeting”.

The revelation was made by Musk after news broke that Apple is planning its own all-electric autonomous vehicle. Musk said he approached Cook “during the darkest days of the Model 3 program”.

That, while unconfirmed, would presumably be sometime around mid-2017. Tesla teetered on the verge of bankruptcy as it tried to release its cheapest model to date. Musk claims he was working 120-hour weeks and sleeping on the factory floor at the time. This year Tesla became the most valuable car manufacturer in the world.

At the time Musk offered Tesla to Apple, it was worth, he said, a tenth of its current value. That would suggest Apple could have picked up a company now worth over $600 billion for around $60 billion. Tesla’s share price has gained over 670% this year. 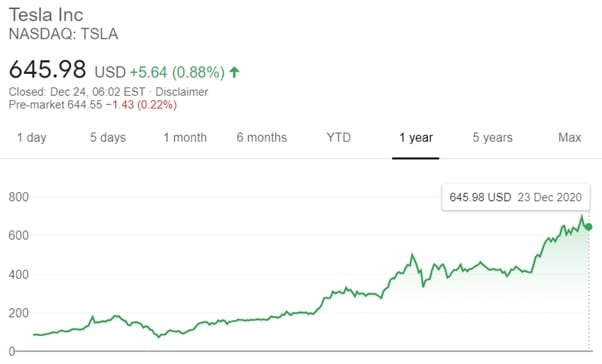 Apple and Tesla both declined to comment on the Twitter revelation but it is believed that the approach was indeed made.

Recent reports say Apple now plans to release its own electric, autonomous vehicle by possibly as soon as 2024. Reuters reports the tech giant has developed a new battery design that could hugely reduce the cost and range of electrical vehicle batteries. A source referred to the developments as “next level,” and “like the first time you saw the iPhone.”

Musk, however, has expressed doubt that the battery technology described in the Reuters report is genuinely possible in the context of an electric vehicle. He said it is “impossible”, due to the maximum voltage achievable in the way described being 100 times too low. He has previously inferred engineering standards at Tesla are higher than those at Apple, which he has described as a “Tesla graveyard”. In 2015 he stated:

But if Apple does invest a chunk of its huge cash pile in the pursuit of its own electric car with driverless capabilities, Tesla would be expected to be one of the biggest losers. The company has the finances, experience with supply chain management and complex electronics manufacturing and brand recognition to potentially be a major player.

Morgan Stanley analyst Adam Jones believes Apple would pose “far more formidable competition”, to Tesla’s hopes of dominating the electric vehicles market than traditional carmakers do. Apple, he says “possesses the key ingredients that we believe are critical to be successful in the future auto industry”.

Key to that, and why Apple is likely to be interested in the sector in the first place, is the expected value of the services expected to be embedded in a future “internet-of-cars”. Morgan Stanley believes the sale of services through a driverless vehicles ecosystem could be potentially worth far more than the auto business itself – sales of actual cars.