The Stock Market Keeps Rising but Is a Correction Due?

The FTSE 100 and FTSE All Share Index have been climbing inexorably higher since February 2016, seemingly impervious to the turmoil surrounding the Brexit referendum, the subsequent disarray apparent before invoking Article 50 and the poor start to exit negotiations. Over the pond in the US, stock markets have also been regularly establishing new record highs this year despite political instability around the Trump government, strained international relations, a weakened dollar and regular interest rate hikes by the Fed. All of which would ordinarily be expected to put a damper on the major benchmark indices of the S&P 500, Nasdaq and Dow Jones Industrial average.

It’s a seemingly global phenomenon with the MSCI All-Country World Index, a benchmark index for global stocks, up over 18% for the year to date. What is currently happening seems to be defying reality, with disappointing macroeconomic data in the U.S., and to a lesser extent in the UK, the backdrop to the value of corporations continuing to rise.

It all begs the question whether there are other factors in play that explain the meteoric rise of international stock markets over the past two years? Or are markets trending against their own internal logic and simply adding more air to a bubble that will finally pop in more dramatic fashion as a result of recent gains?

According to John Kingham, if we remove sentiment-based factors such as political turmoil and focus on fundamentals such as earnings, the FTSE 100 index is actually pretty close to ‘fair value’ as calculated by its CAPE (cyclically adjusted earnings per share) ratio. Kingham believes that while it is impossible to accurately predict whether the FTSE 100 and FTSE All Share indices will rise or fall over the next 12 months, we shouldn’t expect any major correction. It we see a drop it is most likely to be a relatively modest one of a few percent. Despite an 8-year bull market, it has been a slow and steady rise over most of the period and it started from a backdrop of the FTSE 100 being valued as low as half of fair value in 2009. Indices can sometimes rise to as much as double fair value. 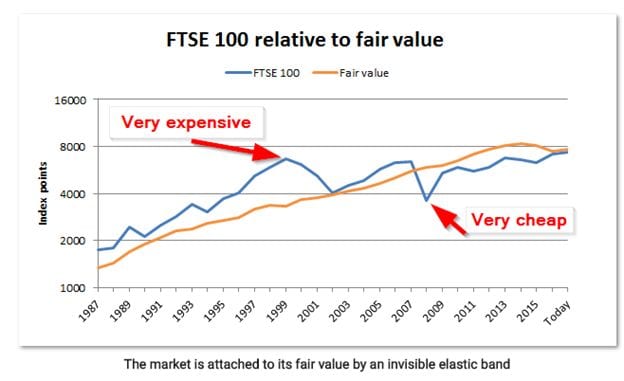 Source: UKValueInvestor.com
With a level currently almost level with fair value, unless we see any major drop-off in earnings of UK-listed companies, there seems little evidence to suggest any impending stock market crash.

Over in the U.S., however, PE ratios are notably higher than their 5 and 10-year averages with the S&P 500 at 17.7 against 15.6 and 14.1 respective 5 and 10-year average ratios. This has led some analysts to believe that U.S. equities are nearing a ‘melt-up’ period. This is defined as intense overbuying based on buyers fearing missing out on a rising market instead of critically examining fundamentals or economics.

It does look as though the higher likelihood is that equities markets will remain on the front foot this year. The UK’s market looks sustainably healthy, as long as company earnings don’t take a dive, though the U.S. could now be into dangerous territory though likely to keep on rising at least in the short term. UK equities are, however, quite closely correlated to U.S. markets so investors should keep an eye on what’s happening on the other side of the Atlantic as well as at home.

Property Market in Scotland, North England and Midlands Hotter than in a Decade

IPOs could be blown open for retail investors...

Global stock rally to continue for at least...

HSBC doubles down on pivot towards Asia as...

A by-product of this adoption is increased access to the asset, with at least... END_OF_DOCUMENT_TOKEN_TO_BE_REPLACED

At the annual meeting of shareholders of the Daily Journal Corporation, Munger explained why... END_OF_DOCUMENT_TOKEN_TO_BE_REPLACED