Yesterday the S&P 500 broke the record for the longest bull run in the entire history of equity markets, as defined by the number of consecutive trading days without a 20% fall in overall market capitalisation. Over the past couple of weeks, we have published a number of articles around expert opinion that inclines towards starting to take profits and hold more cash in anticipation of an eventual correction.

While we believe that hedging against a correction which must come sooner or later is prudent, today we’ll look at the other side of the coin – the opinion that those investing online in equities, both in the UK, USA and internationally, still have time to take more profit. Or for new investors, that it may not be too late to join the party. 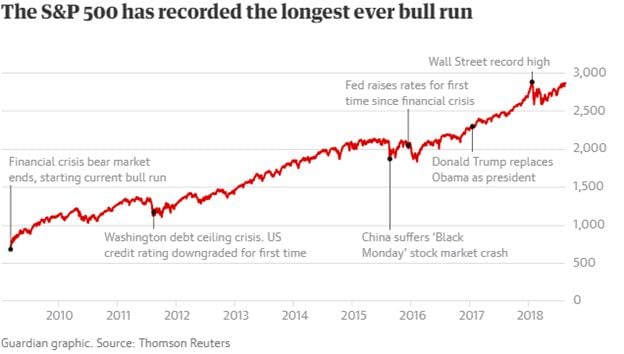 Miles Costello of The Times’ Tempus column believes that there are still attractive plays on the US bull run. He thinks the financial sector is likely to get a boost from the expected two incremental interest rate rises the Federal Reserve is predicted to deliver before the end of this year. Goldman Sachs and Morgan Stanley are highlighted as likely to see their investment banking units cash in on global growth and believes they are attractive stocks at current earnings multiples.

He does, however, also point out the threat of President Trump’s aggressive approach to new trade tariffs and recommends steering clear of stocks most at risk of fallout from that strategy. Within that context his tip is to focus on businesses with international revenues, are well-capitalised and have proven themselves as durable. Nike and Visa are highlighted though with the caveat neither are cheap.

Protecting against the risk of a severe correction hitting is also advised. Despite the potential for a downturn if credit markets correct themselves as the effects of quantitative easing dries up, forcing fund managers to cash in on equities if clients seek to redeem investments to cover a drop in bond markets, Costello’s opinion is that strong US economic growth will provide a buffer. He believes a rise in personal and business spending suggests current growth rates are sustainable. However, there may be a shake-out of weaker companies, so when investing online in U.S. stocks the strongest should be prioritised over higher risk prospects that will be more vulnerable to a ‘risk-off’ mood swing.

The conclusion is that ‘caution’ should be the watchword for investors but that there is still the potential for money to be made over the coming months and potentially longer investing online in the right U.S. stocks.