These Non-FAANG Tech Stocks Are Worth A Look

Whether through direct ownership of the stocks, or indirectly through investments in the major Wall Street indices or U.S.-focused funds or indices, most investors have some level of exposure to the FAANG tech stocks. And that exposure has generally been very positive for the past ten years, driving returns for many portfolios.

After a correction in late-2018, last year was also a strong one for the FAANGs – Facebook, Apple, Amazon, Netflix and Google (Alphabet). The five companies saw their aggregate market capitalisation increase by 41%. Apple led the way with its best year since 2009. The iPhone maker’s stock price more than doubled over the year to January 2020. Facebook was the best of the rest with a gain of 51% in 2019.

While the remaining three FAANGs underperformed their benchmark index returns, the Nasdaq gained 33% over 2019, they still did well for investors. Alphabet’s value rose by 26%, Amazon’s by 19% and Netflix 9%. Yes, the FAANGs, like almost every other public company, have suffered from sharp falls in value since the onset of the coronavirus-inspired mass sell-off. But with deep cash reserves, few would bet against them bouncing back strongly. 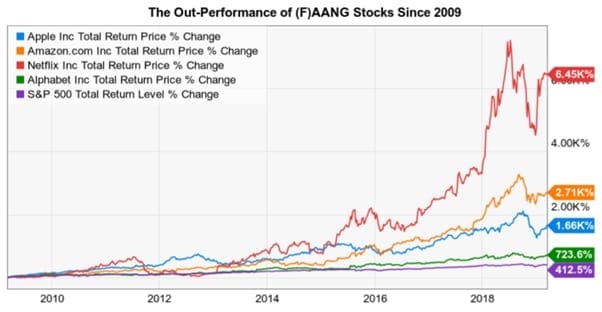 Into 2020 and Brits investing online still have a healthy appetite for exposure to the technology sector. 3 of fund platform Interactive Investor’s top selling funds in January were exclusively tech funds – L&G Global Technology Index Trust was the platform’s 5th best seller, Fidelity Global Technology its 6th and AXA Framlington Global Technology came in as the 9th most popular fund with investors.

For years, large cap tech stocks have been the equity market’s engine of growth. Now, having fallen along with the rest of the market, there is a good chance that there might again be the chance of strong gains for new investments in FAANG stocks whenever the recovery takes hold.

But it should also be remembered that before the downturn, large cap tech stocks had reached record valuation multiples. It stands to reason that, even if these stocks were to return to their pre-coronavirus crisis levels relatively quickly, growth would then slow going forward. Even if their huge cash piles might well be used to take advantage of the struggles of other companies to move into new niches and verticals.

Many financial markets analysts believe that when stock markets do return to relative health, investors will be less generous with high growth tech companies. At least for a few years until the collective investor memory forgets again that markets can also go down. But the kind of valuations that rely on confidence in economic, revenue and profit growth for years into the future may become a thing of the past for the foreseeable future. Investors have been reminded that making presumptions based on the status quo that look too far ahead is unwise.

It would also be wise for investors to remember that, historically, few companies defy a gradual transition into a ‘mature’ phase, where they remain successful but grow more slowly. Doing so would require constant new waves of technological innovation to create new ‘blue ocean’ markets, or move into new markets.

Today’s FAANGs usurped a previous generation of tech companies, such as Nokia, Dell, Cisco, Blackberry etc. An exception is Microsoft, which after a lull has returned in recent years as a newly high-growth tech company. Of the others mentioned as examples, with the exception of Blackberry, they are still ‘successful’ large companies. But they are not high growth companies. They’ve evolved into stable cash generating businesses.

Investors in the FAANGs would do well to remember that the cycle of regeneration and technological innovation is generally strongest in the years after an economic downturn. The wheel turns and the fortunes of especially tech companies tends to rise and fall. It would be unrealistic to expect all 5 of the FAANGs to still be among the highest growth large cap tech companies 10 or even 5 years from now.

And they all face challenges. Disney, Comcast and other large players are now providing Netflix with increased competition. Facebook and Alphabet (Google) both face data privacy pressure and Google an anti-trust crackdown by competition watchdogs around the world. The big boys of traditional retail, like Walmart, are starting to learn the ropes online and taking the fight to Amazon.

Are the returns that could still be made worth the risk of the crowded and expensive FAANGs? It’s becoming a difficult question. Some of the FAANGs could still grow. There is an argument the post-coronavirus world could represent conditions that would be in their deep-pocketed favour.

But there is another argument, at least as strong as that which suggests the FAANGs will continue to go from strength to strength. That it is time for investors to intensify their search for the tech stocks that might replace those of the past decade as the high growth companies of the coming 10 years.

Smaller tech companies that still have lots of room to grow are higher risk, because that growth might not eventuate. But if it does, they have much more space to grow than companies that already behemoths. One way to spread the risk is for investors to opt for funds that invest across tens to hundreds of promising young tech companies.

Many analysts believe Asia will be the next hotbed of big international tech companies and that Europe’s day in the sun may also come.

In Asia, funds worth looking at include the Jupiter Asian Income fund. It invests in northeast Asian tech companies, that pay dividends. The fund has returned 21.7% over the past three years and includes investments in the Taiwan Semiconductor Manufacturing Company, Samsung and Media Tek, a chip design company.

Another option is to look at the BATs – China’s equivalent to the FAANGs, with the acronym covering Baidu, Alibaba and Tencent. Baidu runs China’s dominant search engine, with the country one of the few places where Google doesn’t dominate. Alibaba can be considered as the BATs equivalent to Amazon and is currently growing much faster – up 66% over 2019. Tencent is a gaming, social media and messaging conglomerate back on track after a tricky period in early 2019 after Chinese authorities temporarily halted the approval for new video game licenses.

In Europe, there are also tech companies worth looking at. Graham Clapp, fund manager at RWC Continental European Equity highlights ASML. The company is a global leader in photolithography machines, which are used to make semiconductors.

“The share price was volatile in the first decade. In the past decade it has really come good. Shares he bought for just under €20 are now worth €240. For me that really shows how a small company can grow.”

And just like Airbnb and Uber rose to prominence over the last decade as the gig economy grew in the aftermath of the last financial crisis, new tech trends will undoubtedly emerge from the current crisis. The next few years could well announce the arrival of future tech giants that are currently either not yet on the radar, or even born.

Market crashes of the extent of the one we currently seem to be in can wreak devastation. But just like the blooming of nature after a major fire, life springs anew in stock markets and the economy as well. Keep your eyes open for new tech arrivals.

Natural gas prices have rocketed with Russia accused of managing supply to drive up... END_OF_DOCUMENT_TOKEN_TO_BE_REPLACED

After their valuations boomed in 2020, the UK’s online fast-fashion giants of Asos and... END_OF_DOCUMENT_TOKEN_TO_BE_REPLACED

The dust has almost settled on the months-long takeover battle between U.S.-based private equity... END_OF_DOCUMENT_TOKEN_TO_BE_REPLACED