The THG share price has gained 21% to 141.56p today after the online retail group’s board publically rejected one £2.12 billion offer worth 170p-a-share immediately after Nick Candy announced his intention to make another. Candy, a British property investor best known for eye-wateringly expensive upmarket London developments, said he had started to weigh up an offer. He was also recently part of a consortium trying to buy the London football club Chelsea, currently owned by the sanctioned Russian businessman Roman Abramovich.

Mr Candy released an after-market statement announcing his investment vehicle Candy Ventures was in “the very early stages of considering a possible offer” for the whole company. That was immediately followed by an announcement from THG, formerly The Hut Group, that its board had received and rejected another buy-out offer as “significantly” undervaluing the company. 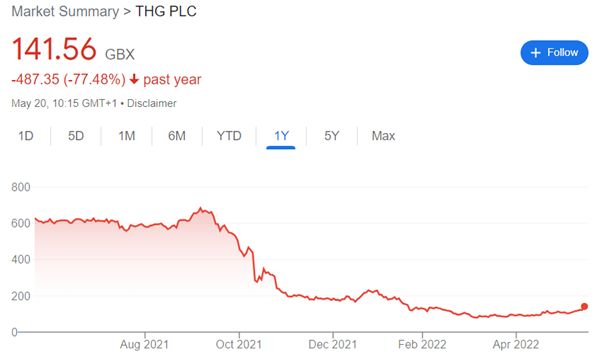 That bid of 170p-a-share, a significant premium on THG’s share price of 116.1p at the close of markets yesterday, was made by Belerion Capital Group and King Street Capital Management. Belerion counts as one of THG’s earliest major backers and its chief executive Iain McDonald has sat on the THG board as a non-executive director since 2010. King Street is an American private equity vehicle with $20 billion of assets under management.

THG’s decision to accept or reject any takeover bid, of which it says there have been “numerous” made that were “unacceptable”, ultimately comes down to its chief executive and co-founder Matt Goulding. Mr Goulding holds a golden share that allows him to veto any hostile takeover bid.

The golden share is one of several corporate governance concerns that have been raised around Mr Goulding’s level of control over the e-commerce company, which runs over 100 websites selling branded products online with a focus on the health and fitness and beauty products markets.

Mr Goulding also acts as THG’s landlord, banking £19 million in rent from the company he holds around 25% of for properties he owns and leases to it. THG floated in September 2020 at a £5.4 billion listing and its share price initially performed well before collapsing about 85% from its list price. Mr Moulding, who benefitted from an £830 million share award when the company’s valuation hit targets in its early weeks of trading, has blamed short-sellers for its poor performance since.

Late last year Mr Moulding said he would consider taking the company private again in an interview with GQ magazine, stating that he, other company employees and early investors still held around 50% of equity between them. THG’s share price has continued to decline this year, down over 31%, on doubts over the value of its Ingenuity technology platform division, and the likelihood of Softbank taking up an option to buy 20% of it at a $4.7 billion valuation. Softbank bought 10% of THG last May.

THG has been the subject of takeover speculation for months now and analysts believe one likely future development could be for new owners to re-list THG on an American exchange. Moulding has publically stated he regrets not doing so originally because U.S. investors “get” high-growth, loss-making technology businesses better than those in the UK. Private equity firms Apollo, Leonard Green and Advent have all been credited with an interest in acquiring THG.

UK takeover rules mean both the Belerion consortium and Candy Ventures, having gone public with their intention to make, or possibly make bids, now have until June 16 to make offers or walk away.