For anyone who is unlucky enough to have booked a holiday through Thomas Cook, especially for those actually on their holiday when the company collapsed this week, the demise of the world’s oldest tour operator has been an unmitigated disaster.

The same can be said of the company’s thousands of employees and business creditors owed money. However, the same can’t be said of Thomas Cook’s rivals, which have been boosted by soaring share prices this week with markets clearly presuming they will cash in by sweeping up their fallen rival’s business.

Rival tour operator TUI, listed on both the London and Frankfurt stock exchange, has seen its share price soar by over 14% since markets closed on Friday. The TUI share price is up over 7% today and benefited from a similar gain yesterday. 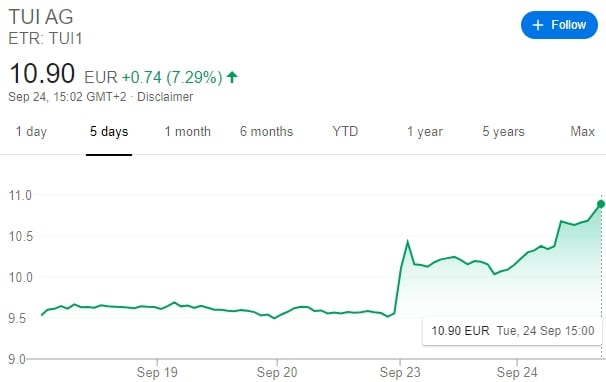 Budget airline EasyJet is up over 8% this week and Ryanair 3%. Dart Group, which owns Jet2.com, which has been accused of ‘cashing in’ on the misery caused by Thomas Cook’s collapse by hiking the cost of replacement flights by up to double is up over 5.5% for the week to date. The prices of certain TUI holidays have also leapt. The companies in question have pointed to their dynamic pricing models which means flights and package holidays vary in price as supply and demand fluctuates. The fact is that one of the biggest holders of market share in the tour operator industry suddenly crashing out of the picture means heightened demand for those left.

TUI looks to be left in a particularly strong position. While Thomas Cook toiled in recent years, its biggest rival has been adding capacity and looks financially solid. Its secret has been that 70% of its earnings are generated by hotels and cruise ships it directly owns. Thomas Cook worked purely with third-party providers. That has given FTSE 100 constituent TUI better profit margins as well as a much wider moat protecting it from the vagaries of fluctuating demand for package holidays.

The larger TUI, formed by a 2014 merger between UK-based TUI Travel and Germany’s TUI AD, owns hotel brands including Tui Blue, Sensatori and Sensimar. The more upmarket holiday experiences the company has been able to offer through the ownership of those assets has, in recent years, proven a significant competitive advantage over Thomas Cook. The latter had even started to move in a similar direction by establishing its own hotel brands ‘Casa Cook’ and Cook’s Club. However, the development was still at a relatively early stage and will now realise any potential it had to help Thomas Cook become more competitive again.

TUI has not been immune to the downturn that has done for Thomas Cook and also issued 2 profit warnings over seven weeks earlier this year – one the result of being forced to ground its Boeing 737 Max jets amid safety concerns. But it has never been in any serious financial trouble and has since stabilised trading revenues. That positive direction will presumably be reinforced by sweeping up orphaned Thomas Cook clients over the coming months.

There is a risk that the collapse of Thomas Cook will have a negative impact on consumer sentiment towards booking package holidays through a high street tour operator but TUI said yesterday it expects to meet its full year guidance.

“Our vertically integrated business model proves to be resilient, even in this challenging market environment.”

“We like Tui’s diversified operations and legacy brand. However, we foresee several headwinds in the short and medium term, including the challenging backdrop; high fixed cost business model; reassessing market share opportunities in the UK (given Thomas Cook Group) and over-capacity in the German cruise market.”

“The demise of Thomas Cook may well present Tui with unexpected opportunities, although it may be some time until such benefits wash through.”