Thomas Cook’s share price has collapsed by over 40% and was still heading south into London’s Friday afternoon trading session. The creator of the ‘package holiday’ format and one of the world’s oldest travel agents confirmed that the company at an advanced stage of negotiations with China’s Fosun Tourism Group, which is already a significant shareholder.

Fosun already has significant interests in Europe’s tourism market as the owner of Club Med and is reportedly ready to provide Thomas Cook with a desperately needed £750 million cash injection. However, the conditions that would be attached to those funds being handed over would amount to an effective takeover of Thomas Cook.

The proposal currently on the table would see Fosun take over a large minority interest in Thomas Cook’s charter airline and assume full ownership control of its tour business. If the deal is concluded, as it now looks set to be, existing shareholders would see the value of their holdings significantly downgraded. The result of that realisation has been a stampede for the exit door that has seen the Thomas Cook share price nosedive by over 46% at the time of writing. 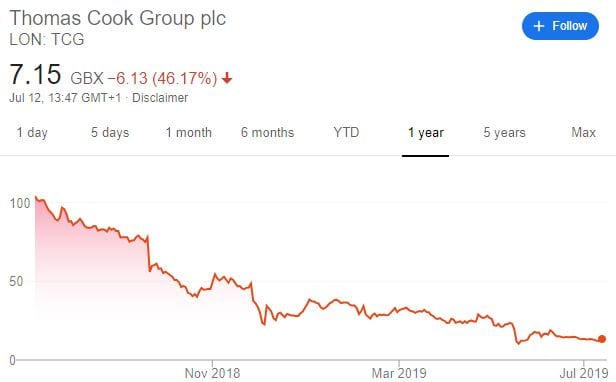 A Fosun Tourism spokesperson commented on the talks:

“Fosun is a shareholder in Thomas Cook, because it is a British company operating in the global travel industry, in which we have extensive experience.

“We are committed investors, with a proven track record of turning around iconic brands including ClubMed and Wolverhampton Wanderers FC.”

Thomas Cook had been conducting a sales process for its airline which has been paused while the Fosun funding negotiations take place. However, market observers believe the proposed sale of the unit would not be returned to in the event of the deal with Fosun taking place, largely down to the fact that market conditions would make it very difficult to find a buyer at a price that made commercial sense. Thomas Cook chief executive Peter Fankhauser announced earlier today:

“After evaluating a broad range of options to reduce our debt and to put our finances onto a more sustainable footing, the board has decided to move forward with a plan to recapitalise the business, supported by a substantial injection of new money from our longstanding shareholder, Fosun, and our core lending banks”.

The slowdown in package holiday and other bookings that has resulted from Brexit uncertainty has had a particularly tough impact on the fine margins package holiday business that Thomas Cook relies on. The company pointed to that as a telling factor when it announced in May that half-year loss of £1.5 billion had been recorded. Higher fuel expenses have also been felt.

A cost cutting restructuring is already underway which includes the closure of 150 head office positions with 21 Thomas Cook branches already closed along with 320 branch roles. Further branch closures have also been indicated as an option being considered. A trading update made in conjunction with the announcement on the Fosun recapitalisation negotiations, which announced a 9% drop in tour bookings and 3% slide in airline bookings added to the gloomy outlook for Thomas Cook shareholders.