Trading of stock in the investment app company Robinhood Markets, which only listed late last week following a disappointing IPO, was suspended yesterday after the share price leapt by 81% over a matter of minutes. The Robinhood share price tumbled by 8% on its first day of trading as a public company, despite the IPO being priced at the bottom of its proposed range due to muted demand.

Friday only brought a marginal improvement but at one point yesterday the Robinhood share price had more than doubled from its weekend level of $35.27. Despite being given a boost by popular American stockpicker Cathie Wood upping her investment in the company over the weekend the extent of yesterdays gains didn’t follow any normal pattern. 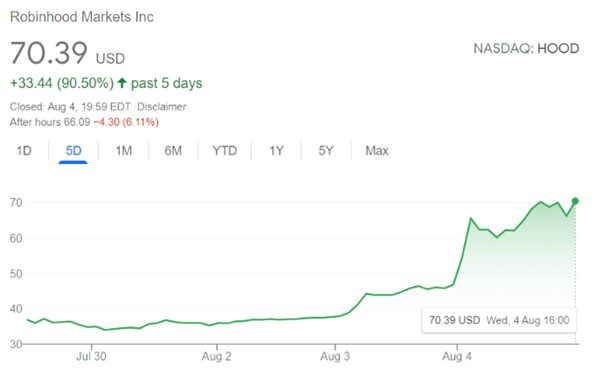 Yesterday’s share price surge would appear to have been caused by the same kind of crowd of retail traders organising themselves online that have caused so much volatility for stocks such as U.S. video games retailer GameStop this year. Despite dropping back later in the day after the circuit breaker trading suspension was lifted, the Robinhood share price still finished up by over 50% with the share price at $70.39.

Robinhood’s app was one of the most popular platforms for thousands of small traders to take positions against shorting hedge funds when the #wallstreetbets craze broke out. There was also loud complaints when the company stopped its users trading the most affected stocks. But yesterday Robinhood itself, whose no-commission app is used by 18 million active investors every month, appears to have become the target.

Menlo Park, California-based Robinhood was founded in 2013 by Vladimir Tenev and Baiju Bhatt with the goal to “democratise finance” by offering commission free trading. The company makes money by charging financial institutions a fee to execute its users’ trades, a practice called “payment for order flow”. The revenues it generates account for 81% of Robinhood’s income with the remainder made by selling users auxiliary services.

Concerns over regulatory scrutiny are one reason why institutional investors have had a luke warm reaction to Robinhood’s market debut. The company told investors just ahead of its IPO that it expects new investigations after it was fined a record $70 million by Wall Street regulator Finra for breaches said to have caused its users “significant harm”.

Robinhood was found guilty of not doing enough to protect its users from placing themselves in financial difficulty by taking on trading positions they can’t afford to cover if they go wrong. One Robinhood user committed suicide last year after mistakenly thinking his trading positions had racked up a $700,000 debt.