In 2016, Twitter’s share price reached an all-time low of around $14, having slumped in value over the three years since its 2013 IPO. The microblogging platform was awash with spammers, bots, fake users and real users hiding behind Twitter handles to espouse hate and dish out abuse.

Genuine users were losing enthusiasm as quality dropped and misuse soared. Investors also weren’t happy that Twitter was reporting growth on a metric of accounts created, rather than differentiating between active and inactive users. The company was, if not in full-blown crisis,  certainly on a slippery slope. 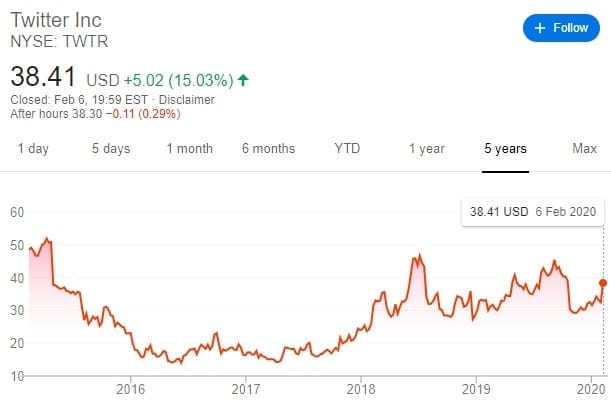 What followed was a painful, but necessary purge of spam accounts controlled by bots and a crackdown on hate speech and particularly nasty ‘trolls’. Twitter also became more transparent in its reporting and introduced a raft of new features, including live video.

The changes Twitter chose to embrace led to a tough period for the company’s share price as its active user metric suffered from having spammers and inactive accounts stripped out. But the increase in quality of genuine user experience that resulted, and regaining of investor trust, started to bear fruit.

The microblogging social media’s valuation has had its ups and downs over the past couple of years. But Twitter does appear to be very much back on track and has answered the questions that were starting to be posed about the sustainability of its long term future.

The most recent evidence of Twitter’s progress came this week as the company announced its Q4 earnings. Quarterly revenues came in at over $1 billion for the first time in the social media company’s history. Twitter’s active user base has also grown by around 20% over the past twelve months.

Having closed last Friday at $32.47, by the end of Thursday, the Twitter share price was sitting pretty at $38.41 – a gain of over 18%. The boost to investor sentiment was provided by an 11% rise in like-for-like turnover from the same period a year earlier, up to $1.01 billion. Advertising sales accounted for $885 million of that, representing 12% growth. Daily user number rose 21% to 152 million, in part thanks to changes to how the platform displays its timeline and approach to notifications.

Net profits did, however, take a hit, dropping to $119 million for the quarter from $255 million a year earlier. Much of that was attributed to a 24% expansion of Twitter’s workforce and is clearly being accepted by investors as a sensible investment in continuing to prove product quality. Another 20% rise in staff numbers is forecast for this year, taking the total to around 5700.

The company has been investing in AI tools able to filter out the fake news and unpleasant to sometimes downright repugnant content that had become endemic on the platform. An October announcement also informed of the decision to ban political advertising on the platform. Twitter reported that its efforts to clean up the platform over the past few years resulted in a 27% drop in complaints over unhealthy content.

With U.S. presidential elections on the horizon, that represents a firm move from Twitter to distance itself from the potential for new accusations the platform could be exploited by malicious actors to push political agendas. Twitter accounts controlled by Russian bots are suspected of spreading fake news in an attempt to influence the last presidential election. The decision also distinguishes Twitter’s policy from that of Facebook, which continues to allow political advertising.

President Trump’s prolific use of Twitter is clearly a major boost to the company on its domestic USA market. The president has around 72.2 million Twitter followers. US revenues were up 17% to $591 million over Q4. International sales showed more modest growth, up 3% to $416 million.

Twitter told investors it expects to spend between $775 million and $825 million on research and development over 2020 and incur a charge of as much as $475 million for share-based bonuses this year.

Uber CEO Pledges Profitability By The End Of 2020

Big Tech Continues To Thrive In Pandemic As...

Global stock markets might be on their way to their worst week since the... END_OF_DOCUMENT_TOKEN_TO_BE_REPLACED