The Twitter share price has gained just 1.2% between an improvement of 0.77% during yesterday’s regular trading session and a 0.45% lift in after hours trading since despite reports Elon Musk has secured the cash to back a $46.5 billion bid for the company.

A number of media have today confirmed paperwork has been filed with U.S. regulators confirming that Musk, who is committing $21 billion of his own fortune to the offer, has secured the rest from investment banks. The group of investment bank backers is led by Morgan Stanley and the paperwork confirmed the finance was in place to “explore whether to commence a tender offer”. 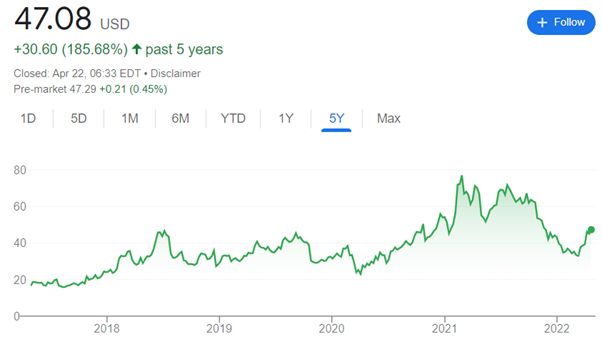 A tender offer is an alternative approach to a hostile bid for a company that bypasses board approval to make an offer directly to shareholders.

Despite being one of the microblogging platform’s most prolific high profile users, 50-year-old Musk has been critical of how it is run. He has questioned its continued role as a forum for free speech given bans for users including Donald Trump the former U.S. president. He has also said he no longer believed the platform suitably upholds democratic principles and likened it to a “public town square”.

Musk is currently Twitter’s largest single shareholder having built up a 9.2% stake since the beginning of the year. He declined a seat on the company’s board earlier this month before launching a hostile take-over bid. The Twitter board has pushed back hard against the approach at the verbal offer for $46 billion and introduced a so-called “poison pill” mechanism to allow it to offer other investors shares at a price lower than the market value.

That move is designed to stop Musk from building his stake further and the company has chosen not to respond to his offer. His recent filing with the SEC said that “given the lack of response by Twitter” (to his offer) he was now considering a direct appeal to shareholders. He has reached agreement with a group of investment banks to put up $22.5 billion in debt which will include a loan against some of his Tesla shares. He is the largest shareholder in the electric car maker that is worth over $1 trillion.

The $21 billion of his own cash that Musk is contributing towards the total will not even put a dent in his current fortune given the recent news that he is in line for a share-based bonus worth $23 billion thanks to Tesla’s recent good performance. He is worth an estimated $263 billion.

Musk has not put a timescale on when he will make a formal bid but there is an expectation it could come in the following weeks. Twitter released a short statement yesterday confirming it had received the “new information on potential financing”. The company’s board said it was

“committed to conducting a careful, comprehensive and deliberate review to determine the course of action that it believes is in the best interest of the company”.

Musk has published, via tweets, a number of suggestions he believes would breathe new life into the social media platform including shaking up its premium Twitter Blue service which charges a subscription. It is currently only available in the USA, Canada and Australia.