The Twitter share price dropped 3% yesterday after founder Jack Dorsey announced the decision to step down as the microblogging social media’s chief executive. It’s the second time Dorsey has left the position. The first was in 2008 when he was pushed out by his board before returning in 2015 in a move reminiscent of Steve Jobs returning to Apple almost two decades earlier. 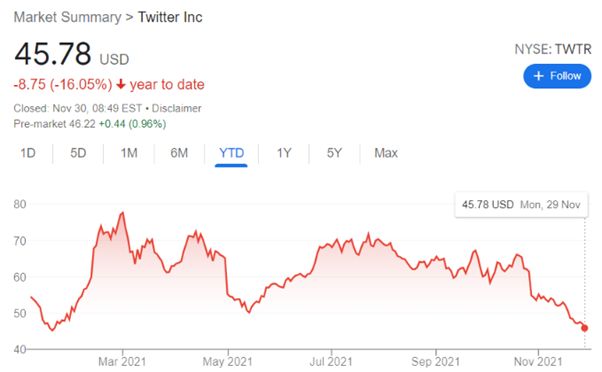 This time, despite some recent pressure by the activist investor Elliott Management, Dorsey, who is also co-founder and chief executive of the payments company Square, has decided to step down on his own terms. In a letter to staff, Dorsey offered his endorsement of the choice of his successor, Parag Agrawal, who joined Twitter as an engineer in 2011 and has been chief technology officer since 2017, saying:

“The board ran a rigorous process considering all options and unanimously appointed Parag. He’s been my choice for some time given how deeply he understands the company and its needs.”

He added on a more personal note:

“I’m really sad … yet really happy. There aren’t many companies that get to this level. And there aren’t many founders that choose their company over their own ego. I know we’ll prove this was the right move.”

The 45-year-old will remain on Twitter’s board of directors until May 2022, at which point he will leave the company altogether. It was also announced that Bret Taylor who has been a member of the company’s board since 2016 will become the new chairman.

The Twitter share initially surged to an 11% gain yesterday amidst rumours that it would be announced Dorsey would leave the company. However, trading was suspended before the announcement and once it was resumed the stock sharply dropped to finish the session with a 3% loss. The company’s share price has lost 16% over 2021.

Known for his large donations and philanthropy, he gave a third of his Twitter stock away to employees a few years ago and last year gave $1 billion in Square shares to Covid-19 relief causes, Forbes estimates Dorsey’s net worth at around $12 billion (£9 billion).

He has always found it difficult to devote his entire attention to one thing and a plan to spend several months in Africa exploring potential applications of cryptocurrencies and blockchain technology last year earned a sharp rebuke from Twitter shareholder Elliott Management. When pushed out as Twitter chief executive in 2018 he was replaced by Evan Williams, who funded the social media in its early stages as a business, who is reported to have commented in reference to his predecessor’s interest in fashion design:

“You can either be a dressmaker or the CEO of Twitter. You can’t be both.”