Speculation that was because he intended to build a larger stake or mount a hostile takeover bid, the board seat was conditional on Musk’s stake remaining less than 14.9%, proved founded when he subsequently offered $43 billion to take the social media company private. Musk said his offer, representing a bid of $54.20-a-share, was his “best and final”. 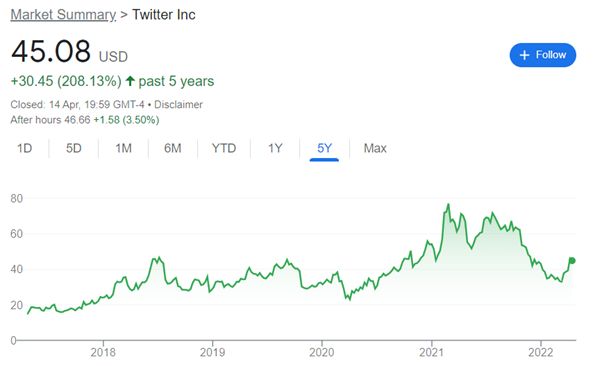 The offer represented a premium of 54% on Twitter’s valuation at the point Musk started to buy its stock in January but is some way off the company’s record high of $77.63-a-share achieved last March. The fact that the Twitter share price actually dropped by 1.7% yesterday to $45.08 suggests markets are sceptical that Musk’s offer will be accepted.

He also said that he doesn’t believe the way Twitter is currently run, and its public company status, is viable and that he would have to “reconsider” his position as a shareholder if his offer to take it private is rejected. The company’s valuation is around 20% higher than it was before it was revealed in early April that Musk had built a considerable stake. If markets reach the conclusion he will sell that stake off again, further falls might be expected.

While the Twitter board has said it will evaluate what Musk has said will be his only offer for the company, Musk himself yesterday admitted “I’m not sure I will actually be able to acquire it”, at a TED event he was speaking at in Vancouver. Another of Twitter’s largest shareholders, Saudi Arabia’s Prince Alwaleed bin Talal said he did not believe Musk’s offer “comes close” to the company’s “intrinsic value”.

“directly and indirectly” by Saudi Arabia, before adding “what are the kingdom’s views on journalistic freedom of speech?”

Making Twitter a platform offering “freedom of speech” is, Musk said yesterday, crucial to the functioning of democracy. And he claims the platform currently doesn’t offer that due to bans issued to users who violate its terms. The highest-profile victim of a Twitter ban has been the former POTUS Donald Trump who was previously a prolific user of the platform.

It’s also not entirely clear how Musk, who despite being the richest man in the world thanks to his stake in the electric car company Tesla has described himself as “cash poor” would raise the funds to complete the deal. He could sell Tesla shares but that would dilute his control of the company, or he could take out a huge loan against his assets.

However, he yesterday appeared to suggest he would involve other investors in taking Twitter private, saying at the TED event he was speaking at:

“The intent is to retain as many shareholders as is allowed by the law in a private company, which I think is around 2,000, or so.”

However, as it stands, it would appear more likely that the bid will fail than succeed. Which is likely to see Musk sell off his current stake in the company, depressing its valuation.