A group of Twitter investors are suing Elon Musk in a class action lawsuit that accuses him of market manipulation to intentionally drive down the company’s share price. The suit, filed in a San Francisco federal district court, alleges comments made by Musk on May 13 were designed to hurt the company’s value, to negotiate a discount on his $44 billion offer to buy the company. Musk alleged a high percentage of Twitter accounts as controlled by bots.

Musk had a $44 billion offer for the social media company Twitter accepted last month but he has since stalled on completing the deal. He claims he requires proof of the accuracy of Twitter’s “best estimate” that only around 5% of its active accounts are fake profiles run by bots. He believes the real total is much higher. 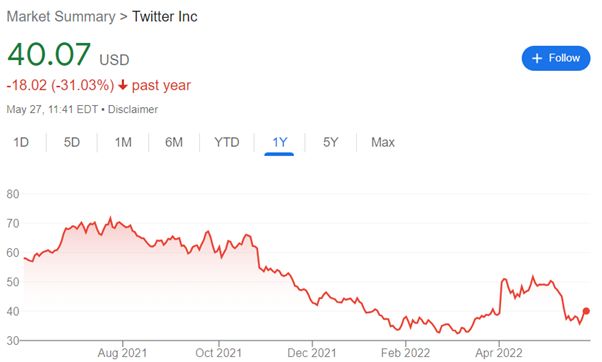 However, with Twitter never claiming its 5% figure was anything other than an estimate, legal experts believe Musk has little grounds to renegotiate the agreed purchase price. The deal has a $1 billion break clause but that is only applicable to it not going through due to a regulatory decision or some other factor out of the control of the company and Musk. The Tesla boss, who is the world’s richest individual, is obliged by market rules to complete the $44 billion acquisition by October.

The lawsuit has been filed by William Heresniak, a Twitter shareholder, on behalf of an unspecified number of investors. The suit also alleges Musk’s failure to disclose a 9.2% stake in Twitter amounts to a breach of US Securities and Exchange Commission rules.

By the letter of the rules, Musk should have disclosed his stake within ten days but only did so on April 4, which was 15 working days later. During that time, he also published tweets suggesting he was considering launching his own social network to rival Twitter. The investors say that failing to announce the stake purchased on March 14 on time saved Musk $156 million because the company’s value declined in the intervening period.

The suit also says Musk’s tweets on May 13 and 17 saying he had paused the deal because he doesn’t believe Twitter’s estimation of its fake account numbers was accurate caused the company’s valuation to drop by $8 billion. It complains Musk’s announcements amount to market manipulation.

The market still appears sceptical of Musk’s purchase of Twitter going through. The company’s share price is currently around 27% below his offer.