The Twitter share price close 5.6% higher yesterday after the microblogging platform’s board performed a dramatic about and recommended shareholders accept Elon Musk’s $44 billion bid for the company. The deal still needs to be approved by both shareholders and regulators and there is still a possibility of another buyer coming forward with a higher bid. However, that appears unlikely and it now looks odds-on that Musk will acquire the company and take it private.

Twitter’s board reportedly spent several days frantically attempting to attract another bid for the company. That failed and Musk appears to have been confident no rival would enter the ring when he challenged the board to demonstrate to shareholders how they intended to generate better value for them than what he was offering for the company. He also said that he would “consider” going to shareholders directly if the tech giant’s board continued to refuse to engage with him. 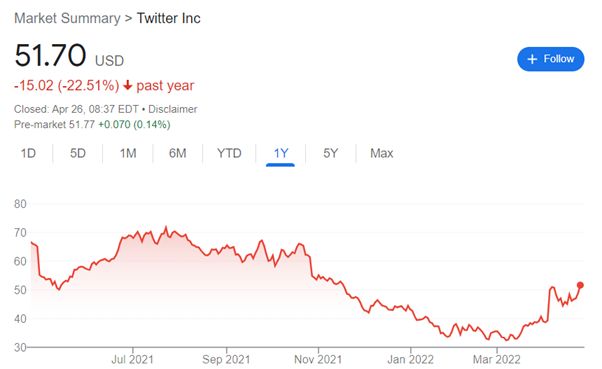 The support of Twitter founder Jack Dorsey, who last year stepped down as CEO and hand-picked incumbent Parag Agrawal, is believed to have been crucial in swaying the board, chaired by Salesforce co-CEO Bret Taylor, towards reconsidering Musk’s bid as the “best path forward” for shareholders.

While the position of Agrawal, of who Musk has been openly critical, is likely to prove untenable if Musk’s acquisition of the company goes through as expected, Dorsey, who still sits on the board and owns 2% of company, was fulsome in his praise of the prospective buyer. He tweeted to his 6 million followers that

“Elon is the singular solution I trust”, adding “this is the right path … I believe it with all my heart. Around the world, and into the stars!”

Mr Taylor commented that the board, which initially refused to respond to Musk’s bid and made what turned out to be a weak attempt to stave it off with a “poison pill” mechanism making it difficult for him to increase his 9% stake beyond 14.9%, had conducted a

“thoughtful and comprehensive process” before opting to recommend it. That process, he said, was carried out “with a deliberate focus on value, certainty and financing. The proposed transaction will deliver a substantial cash premium and we believe it is the best path forward for Twitter’s stockholders.”

CEO Agrawal, who has held the position since November last year, tweeted:

“Twitter has a purpose and relevance that impacts the entire world. Deeply proud of our teams and inspired by the work that has never been more important.”

“once the deal closes, we don’t know which direction the platform will go.”

Musk, who has said he did not have confidence in the present executives’ leadership is expected to fire Agrawal after the deal closes.

“I hope even my worst critics remain on Twitter because that is what free speech means.”

Amazon founder Jeff Bezos, the world’s second richest man behind Musk, put that affirmation to an early test with a probing retweet of a comment made by a New York Times reporter reflecting on the importance of China to Musk’s electric cars company Tesla. China is Tesla’s second largest market. Bezos followed that tweet with:

“Interesting question. Did the Chinese government just gain a bit of leverage over the town square? My own answer to this question is probably not… Musk is extremely good at navigating this kind of complexity.”

However Musk decides to shake up Twitter in his attempts to reinvigorate the platform and solve what he sees are its problems, it’s unlikely to be boring.