Having fallen back after an initial 27% leap on news Elon Musk had acquired 9% of the company the Twitter share price rallied by 7.5% yesterday on speculation new bidders could appear for the microblogging platform. After rejecting a seat on the board in exchange for a commitment to keep his stake at below 14.9% last week Musk made an offer of $43 billion for the company he called “his best and final”.

A lukewarm response to the sum on the table and a number of the tech company’s other major investors stating they believed it fell short of Twitter’s “intrinsic value” saw the company’s valuation slide back again. The prospects of a deal at the level Musk said he wouldn’t budge from looked unlikely. 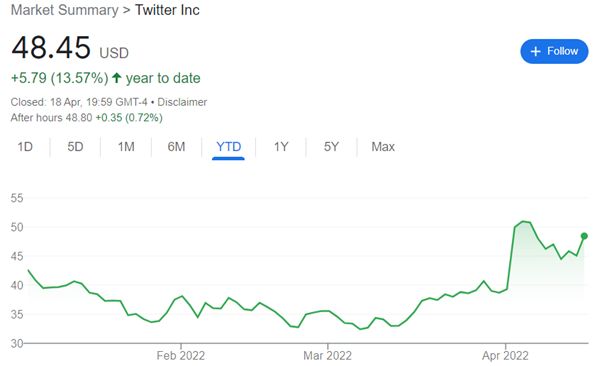 Increasing speculation from Wall Street insiders and analysts that a new bidder could enter the fray with a better offer led to yesterday’s new rally, taking the company’s share price to $48.45. With the Twitter share price still some way short of Musk’s bid of $54.20 markets are not convinced a new, improved bid will emerge. However, yesterday’s 7.5% gains do suggest a level of confidence.

Yesterday’s jump in the Twitter valuation coincided with reports in The Wall Street Journal that private equity giants Apollo Global Management are weighing up joining forces with either Musk or another bidder. If joining a consortium of bidders would convince Musk to increase his offer, at least in terms of its value-per=share, despite his earlier statement indicating he would not remains to be seen. But the world’s richest man has not been historically averse to a u-turn on earlier assertions.

Musk was in typical cryptic and combative spirits over the weekend, fuelling speculation he could bypass the Twitter board and go straight to shareholders with what is known as a tender offer with a tweet that read “Love Me Tender”. He also threatened the social media’s board with a promise to reduce director compensation to zero because their financial interests were “simply not aligned with shareholders”.

The Twitter board’s response has been to introduce a poison pill provision which allows it to offer other shareholders discounted stock if a hostile bidder acquires more than 15% of the business.

Quoted in The Times newspaper, Wedbush Securities analyst Dan Ives commented that the provision gives the board breathing space to attract an alternative offer, saying:

“Twitter’s dream is for another [private equity] bidder to come in at a higher number than 54. The problem is that Twitter is not the ideal PE candidate, given the lack of free cashflow and its focus on advertising.”

The current Twitter share price indicates there is still a healthy level of scepticism that a deal to take the company private will be done. Musk himself has admitted his bid may ultimately end in failure.