The Twitter share price gained over 27% yesterday, its single biggest day improvement since its stock market debut in 2013, after Tesla and SpaceX boss Elon Musk was revealed to have paid $2.9 billion for a 9.2% stake in the microblogging platform he is a keen user of. The share price has gained another 3.2% in after hours trading.

Musk, the world’s richest man thanks to his stake in electric cars company Tesla has bought 73.5 million shares in Twitter making him the company’s single largest investor. It’s as yet unclear exactly what Musk’s long term ambitions around Twitter might be but last month he published a series of tweets that signalled he has turned his attention to making an impact in the social media sector. 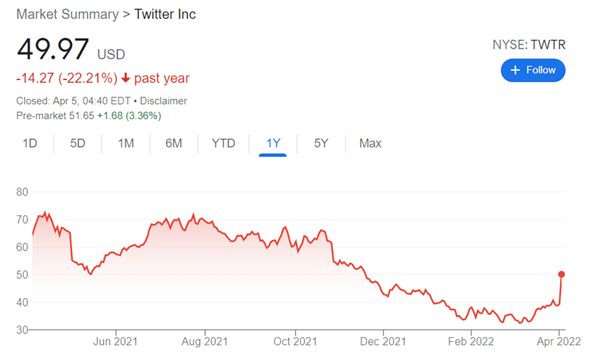 He polled his Twitter 80 million followers, one of the largest groups on Twitter, to ask if they believed the platform “rigorously adheres” to the principles of free speech. Of around 2 million votes cast, around 70% expressed the opinion Twitter does not.

On March 26 he posed the, then seemingly rhetorical, question “is a new platform needed?” In response to questions from followers if he would consider building one he responded “Am giving serious thought to this”.

The evidence of yesterday’s valuation gain for Twitter suggests investors approve of his involvement in the company, even if it is not yet clear exactly what form that will take. There has been some speculation the initial 9.2% stake may be built on in coming months and potentially lead to a takeover bid. Twitter co-founder Jack Dorsey, a friend of Musk’s, also left his position as chief executive last November. His seat on the board will also be vacated next month.

Twitter itself is yet to comment on its new investor but will presumably be happy with the boost in valuation to over $40 billion yesterday. Every day millions of tweets are posted via the application and quite a few from high profile political, business and other leaders. Former U.S. president Donald Trump was a keen user before being banned in the aftermath of the 2021 Capitol riot he is accused of inciting.

Those kinds of actions have seen Twitter and other major Silicon Valley social media accused of stifling free speech and attempting to influence the political landscape. As mentioned, Musk has also criticised the sector for its free speech credentials and ban policies.

Musk has also found himself in trouble in the past for his ‘shoot from the hip’ approach to tweeting as the chief executive of public companies. The Securities and Exchange Commission imposed controls on what he can and can’t tweet after posts about Tesla that were interpreted in some quarters as having moved the market.

His most controversial tweet was made in 2018 when he said he had secured the funding to take Tesla private again. The fallout saw him forced to step down as the company’s chairman and both he and Tesla were fined $20 million.

Now, instead of embarking on the huge project of building a new social media platform from the ground up, Musk appears to have trained his sights on Twitter. What is currently a passive stake is expected to lead to conversations with Twitter’s board and management that could foreseeably culminate in an active stake and more directly involved role.

“It does send a message to Twitter. Having a meaningful stake in the company will keep them on their toes, because that passive stake could very quickly become an active stake.”