The Twitter share price is down over 8% in early Friday trading on Wall Street today having fallen by as much as 20% ahead of markets opening after Elon Musk put his $44 billion takeover on hold. The move, which has caught markets by surprise, was explained by Musk as related to fake accounts inflating the microblogging platform’s user numbers.

Two hours later, after the company’s market value had slumped 20%, he added:

When Twitter published its latest quarterly filing on May 2, presumed to be its last before being taken private by Musk, it explained how an internal review had calculated fake account numbers which the tech company claimed represented “fewer than 5 per cent of our MDAU [monetisable daily active users].” 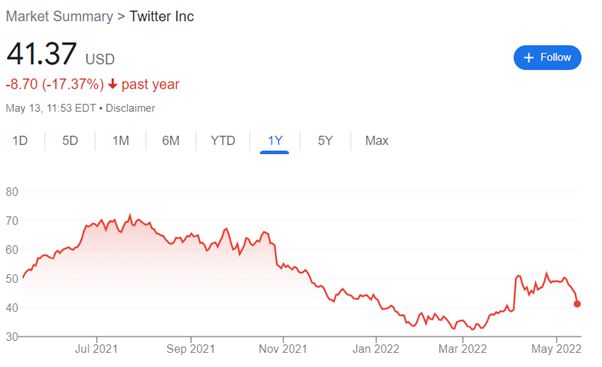 Stock market analysts use MDAU as a key metric when assessing the value of social media companies as potential advertising revenue is seen as tightly connected. Twitter said it believes its MDAU to be around 2017 million but Musk now wants to be convinced of how accurate that estimate is. He has previously said one of his first priorities after taking over the company will be removing “spam bots”.

The extent of the market reaction to Musk’s tweets suggest there are significant concerns that the high profile deal could collapse. Musk’s track record of making big statements he subsequently doesn’t follow through on, such as a 2018 threat to take Teska private and claim he had the investor backing to do so lined up before it turned out he didn’t, meant there was initial scepticism a deal for Twitter would complete. However, those doubts faded after Musk lined up and provided proof of the financing necessary for the deal.

Doubts have now resurfaced and a number of analysts expressed surprise at Musk’s tweeted statements today with Wedbush Securities analyst Dan Ives quoted in The Times as calling them “bizarre”. He continued:

“The implications of this tweet will send this Twitter circus show into a Friday the 13th horror show as now the Street will view this deal as 1) likely falling apart, 2) Musk negotiating for a lower deal price, or 3) Musk simply walking away from the deal with a $1 billion breakup fee.”

Musk has landed himself in hot water before for publishing market-moving tweets and a negotiated settlement with the SEC after his tweets around taking Tesla private mean any which mention the company have to first be cleared. Ives described his taking to Twitter again to throw his acquisition of the company into doubt, rather than through a securities filing, as “very troubling”. He added the approach “now sends this whole deal into a circus show with many questions and no concrete answers as to the path of this deal going forward.”

Founded in 2006, Twitter is one of the world’s largest social networks but has always struggled to monetise as successfully as sector peers like Facebook, Instagram and, more recently, TikTok. The company accepted Musk’s takeover offer last month, weeks after he disclosed he had built up a 9% stake in the business since the turn of the year. He rejected the offer of a seat on the company’s board before mounting an aggressive takeover bid which was initially rebuffed but then accepted after the board failed to attract rival bids.