The share price of micro-blogging social media Twitter has plummeted by close to 20% in after-hours trading after the company yesterday warned it expects a significant drop in 2019 revenues as a result of a ‘bug’ in its ad-targeting system. It also admitted to sharing user data with advertisers without having secured their consent.

The fall all but wipes out the San Francisco-based company’s share price gains over 2019 so far, after it had enjoyed a good run following a rocky second half of 2018. The company’s third quarter incomings were, however, 9% up on the same period last year to $842 million. But that was still a significant $50 million shortfall on analysts’ forecasts. Profits were down more than 50%.

“Despite its challenges, this quarter validates our strategy of investing to drive long-term growth. More work remains to deliver improved revenue products.”

The ‘bugs’ hitting ad revenue were described as having affected the company’s Mobile Application Promotion (MAP) product, and meant ad campaigns had not been targeted as intended. The software errors also limited the company’s ability to “share data with measurement and ad partners”. 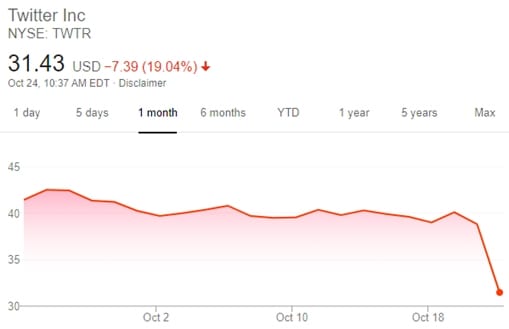 The MAP tool is used by advertisers to promote smartphone apps. The platform’s personalisation technology was also reported as “not operating as expected”.

The company believes that without those technical issues, revenue growth would have been 3 percentage points higher than it ended up being. The bugs were first revealed in August when Twitter announced that technical issues had resulted in it having failed to receive user content for some of their data being shared with third parties including advertisers. It meant that some users were served personalised ads for almost a year despite have chosen privacy settings that meant they should not have.

Fixing the mistake meant removing a significant section of data from that which is used to target ads. The knock-on effect of that was a drop in the prices able to be charged to advertisers. But technical glitches were not the only negative to hurt revenues. Twitter also announced that the ‘seasonality’ of slower advertising revenues over the summer period was more pronounced than usual this year. And with the ad targeting bugs not yet resolved, Twitter said that could mean fourth quarter revenues, traditionally the company’s strongest 3 months, come in as much as $100 million less than forecasts.

Investors in Twitter will hope that the slump is a temporary bump in the road with the social media also managing to sustain its recent improvement in audience growth. There was a 17% year on year rise in ‘total average monetisable daily active users’ – a reporting metric recently introduced by the company after complaints inactive and fake accounts, many of which it has cleaned up in recent times, were artificially inflating user numbers. That number has now reached 145 million

Chief executive Jack Dorsey also commented that Twitter’s users “had responded well to its efforts to crack down on bullying and other abusive content” and improvements to the app making it easier for users to “find what they are looking for on Twitter”.